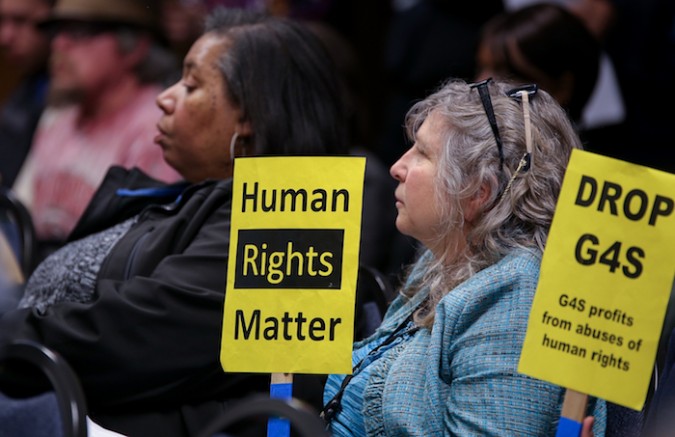 American River College senator Laurie Jones holds up a sign that reads 'Human Rights Matter' during a Sacramento Regional Transit board meeting Monday. The RT board approved a 10% fare increase for July 2016. (Photo by Kyle Elsasser)

Sacramento Regional Transit amended and passed a proposal raising fares at a board meeting Monday night after public outcry against the fare hikes. Those protesting the hikes included students from the American River College Associated Student Body Student Senate.

RT heavily amended its original proposal, passed a resolution to increase all fares 10 percent effective July 1 and made changes to the Paratransit monthly pass.

RT amended the original proposal after receiving public feedback throughout the month of February, including over a thousand online surveys and additional phone calls, emails and town hall meetings.

Doug Carter, a transit consultant for RT, said that he understands that “bad news does not get better with age. Having to raise fares and cut services is bad news… (but) we have to find a way to balance the budget by next year. Reserves are not an option.”

The amended proposal also retained the Paratransit monthly pass, but capped the pass at 44 rides per month.

After hearing comments from nearly 60 members of the public opposing the fare increases, the board passed a third version of the proposal.

RT asked the public to allow the Paratransit and RT riders to speak first, as their transportation would cease running before the end of the meeting. 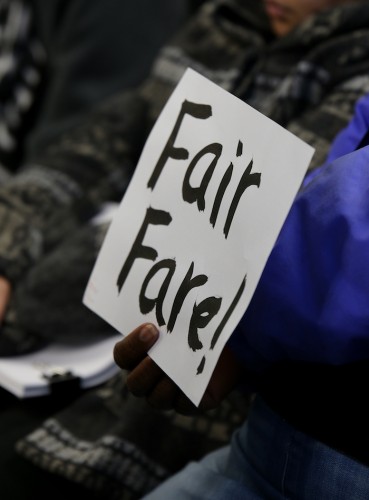 An audience member holds up a sign that reads ‘Fair Fare!’ during the Sacramento Regional Transit board meeting Monday. Several protesters attended the meeting. (Photo by Kyle Elsasser)

Sen. Roberto Garner from ARC’s Student Senate spoke during the public comments and said he’s been riding RT for years and finds the fare increase too steep.

“You guys are picking on the low income, and the senior citizens, and the disabled for no reason,” said Gardner. “And I’m looking directly at you, Mr. Chair. You think this is a game, but it’s not. Put yourself in people’s shoes.”

The passed proposal increased all fares 10 percent starting July 1, but eliminated the fare increase in 2017.

This proposal also kept the Paratransit monthly pass instead of eliminating it, and set two options for caps for number of rides per month.

Paratransit monthly pass users will all pay a new fee of $137.50 per month for their passes starting July 1, but riders can now choose between two monthly pass options.

Sen. Laurie Jones spoke at the meeting, informing board members that ARC’s ASB had passed a resolution opposing the rate hikes and said the amended proposal would “make the disabled vulnerable and further isolate them.”

“When you think about it, 44 trips (on Paratransit) is not even one round trip a day. It’s basically one round trip, maybe a weekday, and then the weekends you’re homebound, you stay there,” Jones said.

Dozens of members of the public protested the rate hikes while the floor was open for public comment.

Esteban Hernandez, who represented the ANSWER coalition, said he was “astounded by how bad our public transit is. It prioritizes profit over people’s needs. It operates more like a company than a public utility.”

The RT board also passed a resolution creating up to 30 jobs for fare checkers on the light rail.

Many members of the public also attended the meeting in protest of RT’s contract with G4S, an international security company.

The protesters alleged that G4S had committed human rights violations.