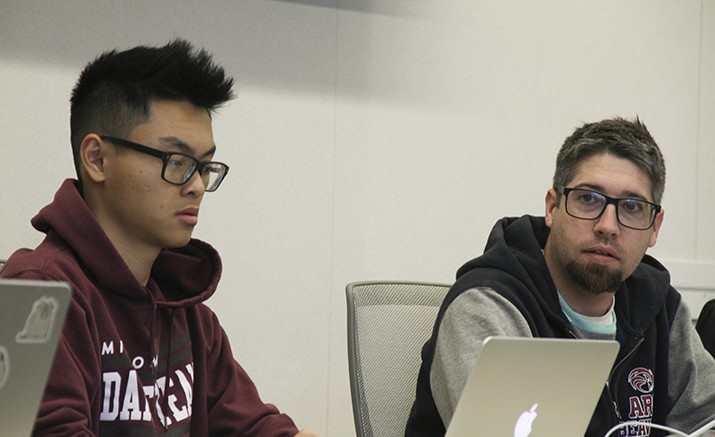 Senate President David Hylton and Director of Activities Kevin Phan listen, during Thursday's Student Senate meeting, to ASB adviser Juan Miguel Blanco as he tells the board that they need to get minutes from the previous four meetings posted online as soon as possible. (Photo by Jordan Schauberger)

The Associated Student Body Student Senate voted Thursday to approve a resolution that offers support to a proposed LGBT pride center on campus, just as the Clubs and Events Board did on Tuesday.

The resolution met less opposition in Senate than it did CAEB with the only two people voting against, one of whom, Sen. James Cortright, also voted no during the CAEB meeting.

CAEB President Justin Nicholson said that there hasn’t been much input from LGBT students.

“It’s (the resolution) has been something that was in the LGBTQ subcommittee and its an idea that they’ve created and are now bringing to our boards,” Nicholson said. “There’s been less student input than I’m comfortable with; we’re saying we have your back, we just don’t know when, where or how.”

Senate President David Hylton II stressed that the point of the resolution isn’t to put to an exact plan but rather to get the conversation started.

“This isn’t for us, right now, to offer monetary (contributions),” Hylton said. “They (the LGBT community) just want us to support the idea of them having that space and it shows the administration that this is something that the Student Senate is urging for.”

Director of Finance Jeremy Diefenbacher said that there has never been a push in the past from the ARC administration on creating a permanent space for the LGBT committee.

“We have had a history of homophobia on this campus,” Diefenbacher said. “I do feel like there has been no positive repercussions to prove that this campus does have a safe space for the LGBTQ community.”

The resolution passed by a vote of five in favor and two in opposition.

The board also approved a resolution that calls for a survey to been taken of ARC students on the need for more accessibility on campus.

Student Trustee Cameron Weaver attended the meeting to inform the board about a project that he’s spearheaded called the “vetting process.”

“This is a tool that we can utilize to take resolutions at the college level and see if we can increase the conversation on that particular topic at the district level,” Weaver said. “We’re currently trying to figure out what system would be best utilized for the organization of this.”

Weaver added that the many reason for this project is to create congruency among the colleges.

“If we have particular colleges voting on particular resolutions and we are noticing a pattern … then when we go to the district, we’ve gone through the appropriate channels and got student input,” Weaver said. “I am personally extremely excited about this; this is kind of like my child.”

Continuing with where they left off in the previous two meetings, the board voted on five resolutions that will be presented at General Assembly later this month.

With General Assembly occurring this weekend, the board failed to vote on 19 of the resolutions and, therefore, gave ARC’s representative at the assembly, Director of Legislative Affairs Laurie Jones, to vote on the remaining resolution based on how own opinion.