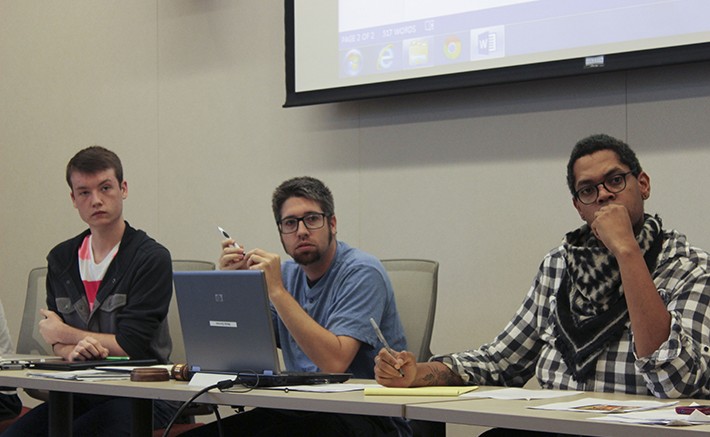 David Hylton, center, will be removed from the position of acting student senate president if three-fourths of voters decide to recall him in an election on eServices that ends Wednesday at 11:30 a.m. (Photo by Jordan Schauberger)

Although the voting site experienced technical difficulties early in the morning, the vote was running functionally at 11:30 a.m. and the voting period, according to ASB adviser Juan Miguel Blanco, will be extended to Wednesday from 7-11:30 a.m. to make up for the missed time today.

The Center for Leadership and Development received a petition last week signed by 417 verified students asking for Hylton’s recall.

The effort was spearheaded by Jorge Riley, who was acting Student Senate President in Fall 2013.

Three-quarters of the voters would have to vote to recall for Hylton to be removed from office.

Hylton, who became acting president after former President Garrett Kegel and Vice President Sam Kinsey abruptly resigned at the end of September, had come under fire due to comments questioning the conduct of Israel and supporting Student Trustee Cameron Weaver, who said he was “skeptical” of the Holocaust.

Riley said he was happy that his petition was accepted. He said he didn’t believe Hylton’s comments were appropriate coming from an elected official.

“I’m excited to see how the vote turns out,” said Riley. “I think his comments were even worse than the ones Weaver made.”

Student Trustee Cameron Weaver made comments, in an interview with the Current, casting doubt on the historical accounts of the Holocaust and the Sept. 11 attacks.

An open forum was hosted by the Center for Leadership and Development on Monday to explain to students how to vote and what the reasoning behind the petition for recall was.

Outside of a reporter from the Current and members of student government, only two students attended the forum.

The petition, according to Blanco, states that Hylton be removed from office “based on radical comments and racial attacks made on Israel.” Hylton said that he didn’t feel his comments were grounds for recall.

Also stated in the petition was a call for a lifetime ban of Hylton from all ASB boards due to previous disciplinary actions for conduct “unbecoming of any representative of American River College.”

This statement refers to the fact that Hylton was censured by the Senate in April after admitting to a drug offense committed while at the state General Assembly for the Student Senate for California Community Colleges in Los Angeles.

Hylton said that if he is recalled he will still take an active role in ARC student government as a student.

“I’ll still attend the meetings as a member of the public,” said Hylton. “I’ll make sure the student voice is still being heard and say something if I feel like what they (the board) is doing is wrong.”

Hylton also remembered a conversation he had with then-President Garrett Kegel about how he was happy that he had lost the presidential election back in April.

“I told Garrett how I was glad I didn’t win the presidency because I wouldn’t have been able to pass any legislation,” said Hylton. “All the bills I wrote are in limbo because I’ve had to assume the presidency.”

Hylton stressed how, regardless of the outcome of the recall election, he just wants it all to be over with so the board can “get back to work.”

ARC student and former Modesto Junior College Student Senate President Doug Dyrssen said that this current recall effort and the situation surrounding embattled Student Trustee Cameron Weaver are a microcosm of the “complete inability of Student Senate’s across California to get anything meaningful done.”

“In California alone, we (student senate board members) represent roughly $1.6 million potential voters and that could be a scary force for politicians if we all came together,” said Dyrssen. “This situation here at ARC just shows how, since we can’t get our act together at the individual school level, we’re never going to be taken seriously when it comes to state legislature.”

In case Hylton is recalled, the boards formed an election committee to process any possible election violation reports and create a clear direction moving forward with finding a new president.

The election results will be posted in the Student Center by Thursday.