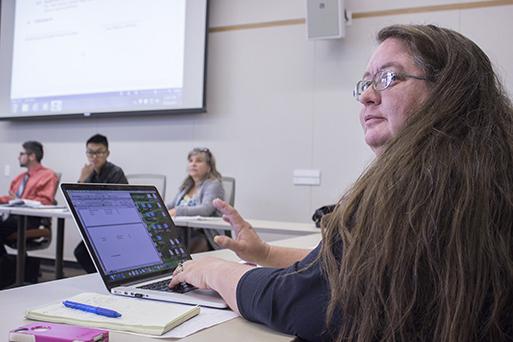 Sen. Tamara Dunning raises her hand asking permission to speak on the proposed recall of Los Rios Student Trustee Cameron Weaver on Thursday. Three of the four student governments of the Los Rios colleges would have to agree to recall Weaver for a special election to take place. (Photo by Karen Reay)

Weaver has come under fire for making remarks in a Sept. 16 interview with the Current that cast doubt on whether the Holocaust actually took place.

ARC student Brett Spencer, a volunteer at the Community and Diversity Center, urged the board to recall Weaver during public comment.

“Holocaust denial is considered anti-Semitic,” said Spencer. “You should get Weaver in to face his accuser, but, as a student, I want to call for his removal.”

Once in discussion about Weaver’s removal, the board presented several different stances on the subject.

Sen. Tamara Dunning said that several students had expressed concern to her about Weaver so she sent in an agenda item request on the possibility of his removal.

“The comments are inappropriate and not representative of the students,” said Dunning. “He did have an opportunity to apologize and he chose not to apologize for what he said or to take back his comments.”

Legislative Analyst McKaela Broitman said that Weaver has had enough time to come to the meeting and they need to make a decision as soon as possible.

“He was aware of this meeting and had the chance to apologize but he didn’t take advantage of any of these opportunities,” said Broitman. “I think it is time that we move forward with action and listen to the students who put us in these chairs and remove him from office.”

Hylton informed the board that, even if the board votes to recall him, it takes three of the four Los Rios Student Senates to vote to recall to call for a special election.

Clubs and Events Board President Justin Nicholson suggested that the board slow down and try to approach this issue from a non-emotional standpoint.

“This is obviously a hot-button topic and my only response to it is I think we should wait until we actually have a chance to address Trustee Weaver before we make any formal decision,” said Nicholson. “We should give him due process … We should remove our personal opinions and proceed as a legislative body.”

Jeremy Diefenbacher, who was appointed to the board Thursday as a senator, said that before making a decision the board needs to gather and check all information pertaining to the recall.

“I think we need to get a transcript of the actual interview,” said Diefenbacher. “I don’t think we should be making any decisions based on a paper article that was run because we do know that there is a history of having misconstrued messages, especially to our political leaders.”

“The actual recording of the interview has been posted. … The comments that he said regarding the Holocaust have been posted,” said Dunning. “He did know about the meeting today and the recall and he’s choosing not to attend.”

Dunning moved to vote to recall Weaver, but Hylton called the motion out of order.

“Under the Fifth Amendment of the U.S. Constitution, he has the right to a trial,” said Hylton.

Dunning reminded the chair that the recall is not a criminal proceeding.

“This is a recall vote,” said Dunning “We are not charging him with a crime.”

“Robert’s Rules (of Order) state the chair has to stay impartial and you’re not really being impartial,” said Reed. “Also, if you created the agenda and this was out of order than you should have just put discussion and not action.”

The decision of Hylton to call Dunning’s motion out of order was successfully appealed, but by that point the meeting had ended, and so the vote to recall Weaver has been tabled until next week’s meeting.

The board appointed Jeremy Diefenbacher, the former CAEB President, and Brent Steele to the board as senators. Both of the new senators have eyes on the vacant director of finance position.

David Hylton, the former director of finance, was officially sworn in as Student Senate President after the resignation of Garrett Kegel on Sept. 29.

The board unanimously approved the allotment of up to $25,000 to fund student advocacy, specifically advertisement for Student Senate.

A preliminary budget outlining the expenditure of advocacy money noted that a full color page in the Current would cost $5,962.50 for nine issues and to have a permanent ad on the newsstands would cost $17,940 for three years.

The board held a moment of silence during the meeting for the victims of the shooting at Umpqua Community College in Oregon.