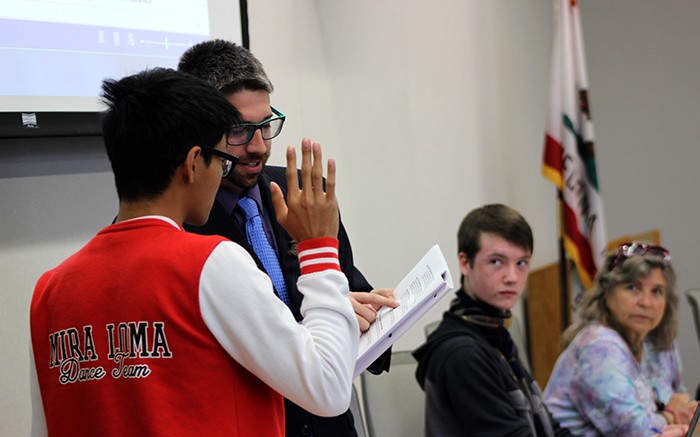 Sen. Kevin Phan, left, is sworn into the Student Senate at Thursday's meeting by David Hylton, who is acting as Senate president following the unexpected resignation of Garrett Kegel. (Photo by Joseph Daniels)

Former Associated Student Body Student Senate President Garrett Kegel, who unexpectedly resigned Wednesday, did not give a reason for his sudden resignation during Thursday’s ASB meeting.

Former vice president Sam Kinsey, who also resigned from his position as Wednesday, gave a short speech to the board in which he said that he was thankful for everyone he worked with and was leaving to pursue new opportunities.

“Thank you to all of you guys, I’ve learned a lot,” said Kinsey. “I’m ready to move on. I’m interning down in City Hall with Sacramento Vice Mayor Alan Warren.”

Kegel told a reporter with the Current that he would respond to an email asking why he resigned, saying that “I’m still kind of processing (the resignation).” He has not returned the email as of press time. 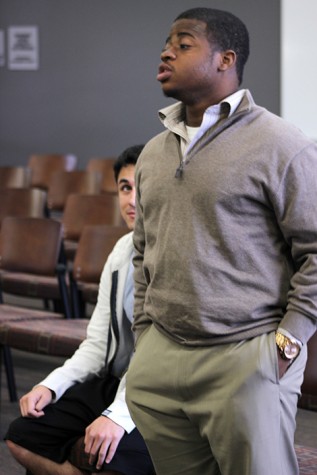 Former ASB Student Senate Vice President Sam Kinsey, right, thanks the board for giving him the opportunity to serve. While he said he is following career opportunities, former Senate President Garrett Kegel, seated, has not given a reason for the resignation as of press time. (Photo by Joseph Daniels)

After the meeting, Clubs and Events Board President Justin Nicholson said that he didn’t know the reason why Kegel resigned.

“I haven’t had a chance to talk to him,” said Nicholson. “If it’s something personal he doesn’t want to be known, it’s his right not to tell people.”

Despite Nicholson’s assertion that he hasn’t spoken with Kegel, a reporter with the Current saw Nicholson in a meeting with Garrett Kegel and Dean of Student Development Manuel Perez through the windows of the latter’s office around 45 minutes before the beginning of the Senate meeting.

Acting President David Hylton, who was censured by the senate in April after admitting to a drug offense committed while at the state General Assembly for the Student Senate for California Community Colleges in Los Angeles, said that the Senate will operate as usual.

“We will continue with the items on our plate,” said Hylton. “We need the director of finance position filled so that JBC (the Joint Budget Committee) can meet.”

When asked if the board would have a response to Los Rios Student Trustee Cameron Weaver’s comments casting doubt upon whether the Holocaust happened, Hylton declined to comment, saying he would only respond to an email or text message.

When asked why he couldn’t comment in person, Hylton said “because I don’t want to.”

Hylton has not returned an email to the Current as of press time.

However, Jones said that to her knowledge the Student Senate had no plans to make a statement, educate their members on the Holocaust or recommend a recall.

Sen. Tamara Dunning said that while she disagrees with the comments, she is not planning to take any action until students make their concerns known to her.

“As a member of the senate, I vote the way the students tell us,” said Dunning. “We’re their voice. As of yet, we have not had a student say anything. There is no guidance on that.”

When asked if Weaver’s views disqualify him from student representation, Dunning said that she works with people with whom she disagrees.

“If students come here, they are welcome to talk about anything during public comment.”

Sen. James Cortwight said that while he personally disagrees with Weaver, he has “no comment on anyone else’s beliefs.”

When asked if he would have voted for Weaver knowing his beliefs on the Holocaust, Cortwight said “I can’t honestly answer that question.”

When asked if he would be taking any action on the issue, Cortwight said he has not taken action.

When asked if ASB took Weaver’s comments seriously, Cortwight said “I have no comment.”

Following that interview, ASB adviser Juan Miguel Blanco asked a reporter with the Current if they could have a private conversation in Blanco’s office.

The meeting was mutually concluded when Blanco refused to allow the reporter to make a recording of the meeting.

Other business at the meeting included the appointments of Regina Drake and Kylie Marx to the board as senators.

Drake said that she has a background in leadership and helping people in the LGBT community.

“I was a part of ASB back east at the College of Alameda,” said Drake. “I’m a transexual and have helped people transition in the past.”

Marx said that, as a first semester student, she wants to improve the school in anyway she can.

“I have previous leadership experience in the Civil Air Patrol,” said Marx. “I want to help and promote positivity as much as possible.”

Kevin Phan was sworn into the board by Hylton after his appointment last month.

John Ferrannini and Barbara Harvey contributed to this report.