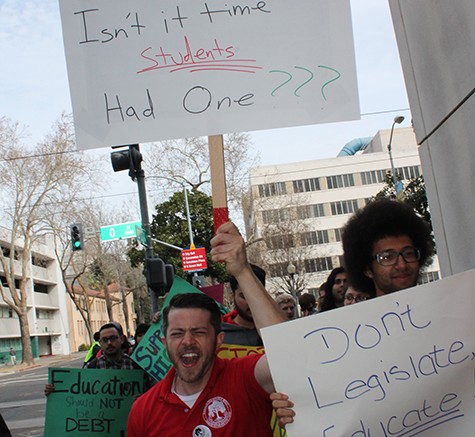 Members of the Associated Student Body student government have expressed support for embattled Los Rios Student Trustee Cameron Weaver after he expressed doubt about historical accounts of the Holocaust, the Sept. 11 attacks and his opinions on other hot-button topics.

Weaver released a statement yesterday in which he did not disavow his comments, but apologized for the “distraction” caused by the Current’s coverage of his remarks.

Sen. Laurie Jones, who ran against Weaver for the trustee position in April, said that she cannot categorically disavow his statements.

“He did not deny the Holocaust,” said Jones. “He was just wondering about how to evaluate conflicting sources of information. I think that’s a reasonable journalistic approach and he was a journalism student when he made that initial statement.”

Jones said that while she heard the Cosumnes River College ASB is interested in a recall, ARC should “support” him.

“I think as his home school, our position would be more of support until we hear something that we totally disagree with,” she said.

Jones said that she felt it was appropriate to ask questions about the numbers of people killed in the Holocaust.

Jones said that she was in most agreement with Weaver on the topic of vaccinations.

“I think that if the vaccines work, then people who have them won’t get sick,” she said. “That was the area where I had the most agreement with him.”

During an interview with the Current Thursday, Clubs and Events Board (CAEB) President Justin Nicholson said that Weaver only “misspoke” regarding his comments on the Holocaust and that it was “his First Amendment right” to have an opinion on this matter.

Nicholson reiterated those comments in an interview Wednesday when asked what he meant.

“I meant that he misspoke, that what he intended to articulate is not what he said. I don’t know the context,” said Nicholson. “I don’t think that Cameron (Weaver) was trying to victimize any group … I feel like Cameron is being pressured on all sides and he doesn’t feel like he has any support.”

Not everyone in ASB is supporting Weaver. Bruce Rand, the director of communications for CAEB, said he read the Current’s article containing the initial remarks four times.

“I’m appalled. I know Cameron (Weaver) and I can’t believe he said something like that,” said Rand. “My mom worked for a Jewish run company and the designer had a tattoo on his arm. You want to tell me the Holocaust didn’t happen? Bull****.”

Garrett Kegel, who resigned his position as ASB student senate president today, said Thursday that Weaver should think before he speaks.

“As a veteran, when someone tries to say that 9/11 didn’t happen, I can’t respect that. As a trustee, that doesn’t represent the students,” said Kegel. “Due to the Prop 8 situation back in 2008, we (Student Senate) can’t have something or someone like this making us look bad. We should think before we speak.”

Sen. Tamara Dunning denounced Weaver’s statements and said that the students have a right to recall him.

“I found the comments he made very disturbing,” said Dunning. “I’m concerned that his apology wasn’t adequate and I agree with the students who are saying that this isn’t what they elected him for.

“According to the Los Rios handbook, three of the four schools would have to vote to recall him. Someone would have to fill out an agenda request to start that process.”

Weaver sent an email to the Los Rios Board of Trustees and Los Rios Chancellor Brian King in which he apologized for the Current’s coverage of his remarks, but did not disavow them.

Mitchel Benson, the associate vice chancellor for communications and media relations for the Los Rios district, sent the email in full to the Current.

I am writing to express my heartfelt apology to you all for the tumult and distraction caused by the recent coverage of me in the ARC Current.

What was reported does not accurately reflect my views, beliefs, or convictions. Even so, I realize that I have brought embarrassment and shame to the Board and myself.  I am disheartened that the Current’s coverage has cast myself and the Board in a negative light and has caused you to doubt your trust in me as the student trustee.

My top priority from this point forward is to work to rebuild those relationships, and rebuild your trust in me as someone who is worthy of the student trustee position, and who can intelligently and passionately represent our students on the Los Rios Board.

I thank President Johnson, Chancellor King and others at the District who have offered me guidance and counsel throughout the past few days. I hope that I can regain your faith in me as a dedicated, committed colleague and, moving forward, I am firmly committed to restoring my integrity as a Los Rios Trustee.

Bruce Pomer, a former Los Rios board member who represents the Jewish Community Relations Council, said that Weaver is “not owning up to this.”

“He indicates that recorded statements don’t accurately represent his views,” said Pomer. “That contradicts itself and he doesn’t make a direct apology for what he said.

“He talks about his being disheartened with your coverage which is carefully based on recorded statements, but at no point does he directly apologize to the Jewish community – and frankly he should apologize to the student body – for statements that imply that the Holocaust might not have existed.”

Pomer, who said he is meeting with King tomorrow, said that he feels positive about the district’s response.

“As a first step I feel positive about how the district has responded,” said Pomer. “But this is a deep problem that isn’t going to go away until he either repudiates his statement or some other action is taken.”

Pomer also responded to the remarks of Jones and Nicholson.

“He (Weaver) clearly said something that called into question the gruesomeness of the Holocaust,” said Pomer. “It’s slaughtered people. There’s nothing ambiguous about it. These questions clearly diminish it and leave it up to interpretation. This clearly conflicts with every known document in history.”

Los Rios Chancellor Brian King has not returned two phone calls from the Current as of press time. Benson, speaking on behalf of King, said that the “counsel” given by King to Weaver was “between the chancellor and Cameron (Weaver) … it was a private conversation.”

Student Senate president to undergo recall election within the week