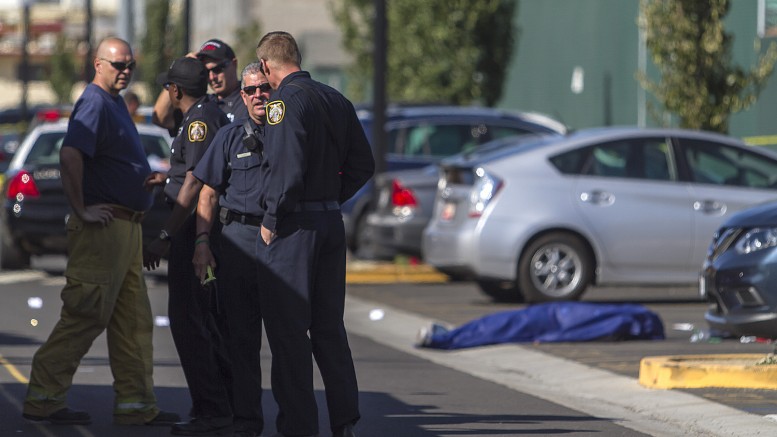 A photo taken by the staff of the Sac City Express, the student newspaper at Sacramento City College, shows the aftermath of the fatal shooting on the campus this afternoon. (Courtesy of Sac City Express)

An altercation preceded the fatal shooting that left one man dead and two injured at Sacramento City College on Thursday, according to SCC public information officer Rick Brewer.

The altercation, which turned deadly when one of the men brandished a semi-automatic handgun, occurred on East Way, a two-lane road which leads into Sacramento City College from Sutterville Road.

One male was pronounced dead on the scene, while a second male victim was transported to the hospital with major injuries. A third victim with minor injuries did not require treatment, according to the Sacramento Police Department.

Ryan Walker, an employee at the nearby KFC, was walking on campus with his girlfriend, an SCC student, when he heard gunshots.

“I heard six to seven gunshots and (my girlfriend) asked ‘What’s that?’ I said ‘gunshots’ and she didn’t believe me. That’s when across the street we saw a bunch of people standing around. There was a heavyset white fellow lying down and they were trying to resuscitate him … We saw another skinny fellow walking around panicking. I think that was (the victim’s) friend.”

A video of the aftermath of the shooting that surfaced on the internet showed three men trying to perform CPR on the deceased victim.

The suspect is described as a male Pacific islander wearing no shirt and cargo shorts, last seen fleeing on foot.

Vienna Montague, news editor of the Sac City Express, was in disbelief as news of the shooting spread.

“We kind of all thought it might be a hoax at first because it’s impossible to imagine that there’s been a shooting on your campus.” 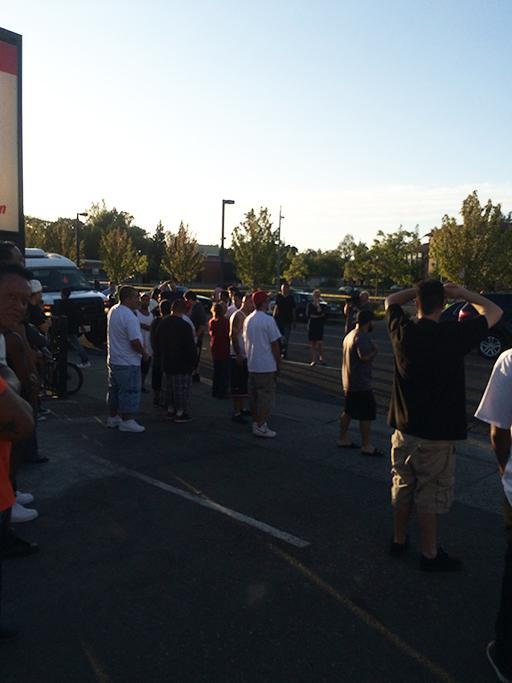 A crowd gathers near the scene of the fatal shooting that occurred at Sacramento City College on Thursday. One victim was pronounced dead at the scene, while two more were transported to the hospital. (Photo by John Ferrannini)

SCC student Tyler Cole was in the library when he learned of the shooting.

“I got a text from my mom asking me if I was OK … I was sitting in the library checking the internet, and very soon there was a post from KCRA saying three people got shot. Quickly after, one was reported dead.”

Cole remained in the library during the lockdown.

“We were on lockdown for about an hour and twenty minutes, and then the cops came in and cleared it, building-to-building, and eventually let us out,” said Cole after being evacuated.

At this time, Sacramento City College has “issued the all-clear,” and classes will resume tomorrow, Brewer said.

“We’re cooperating with law enforcement both from Sacramento and Los Rios, who have been working together since this occurred,” Brewer added.

“Our hearts and prayers go out to the family and loved ones of the victim, and to all Sac City students, faculty and staff during this difficult time,” said Greene. “We stand ready to offer our support and help to the Sac City family, whatever they need.”