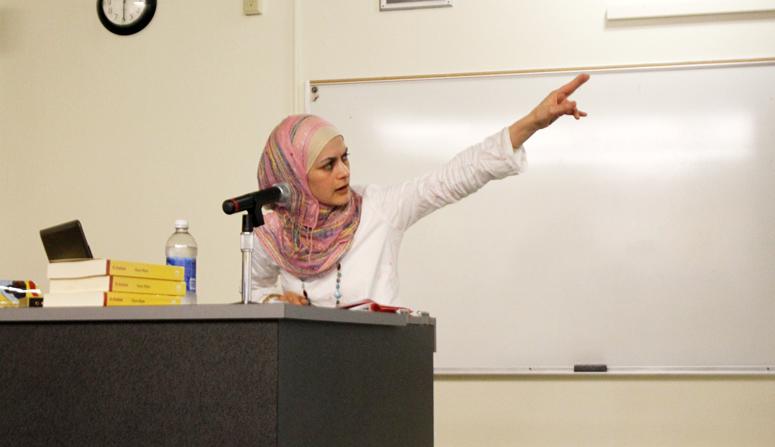 Laila Haddad, a Palestinian mom, author and activist speaks to students about the Gaza Strip and West Bank during ARC’s College Hour on March 22.

Presenting her side of an ongoing and controversial issue, Palestinian mother Laila El-Haddad spoke during college hour at American River College on March 20. Spending her childhood in Gaza City, El-Haddad said she watched as Israel took control of what she considers to be her homeland.

The Palestinian people have gone through a lot in the last 60 years, El-Haddad said. In the 1940s, Palestine controlled about 90 percent of the chunk of land that is now Israel. By the 1960s, Israel took over and left Palestine with about 30 percent. Palestine currently controls about 15 percent of that land.

During her presentation, El-Haddad focused on Gaza Strip, a focal point of the conflict between the two countries, as both have claimed ownership of the land.

In 1967, Israel had occupied most of the land, El-Haddad said. The Israelis decided to conduct a population census. They went door-to-door in Palestinian neighborhoods, asking who lives there. With that information, they began to issue identification cards to the Palestinians.

If you weren’t issued an ID card, she said, you weren’t allowed to enter the country, even if you were a citizen.

“This ID card served as a mechanism to control the movement and the lives of the Palestinians,” El-Haddad said. “Everyone who was there received one, but if you were working in the gulf like many were, or getting schooling elsewhere, you didn’t get one.”

During this process, El-Haddad’s parents lost their home, she said, but were allowed back into the country by the Red Cross because they were physicians and were needed.

In the early ’90s, the Oslo Accords temporarily stopped the fighting between Palestine and Israel. It required Israeli military forces to vacate the Gaza Strip and allowed the Palestinians to self-govern themselves, El Haddad said.

However, Israeli military forces still controlled the borders, which meant that nothing went in or out without their permission. This is the situation that remains today.

The Palestinian people are trapped in the Gaza Strip, El-Haddad said. At any time, Israeli forces can shut down exits and entrances to and from Gaza at anytime for months without warning. El-Haddad said she believes this is strangling the Palestinians.

“The blockade is about no development, no prosperity,” she said.

Which, El-Haddad said, means the stoppage of anything that could help grow the Palestinian people and economy; for instance, tools to repair factories that were damaged from the many years of fighting.

“In fact, it was a very clear and calculated policy that intended … to keep Gaza on the brink of collapse,” El-Haddad said.