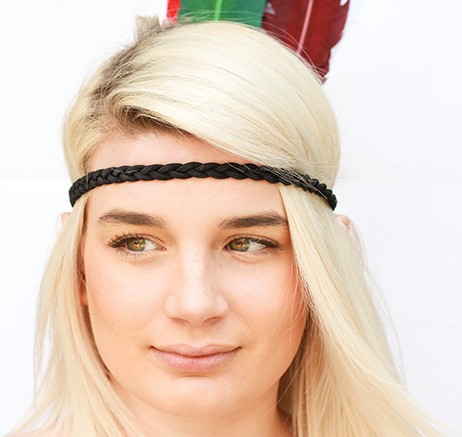 Cultural appropriation is the act of one race or culture taking aspects of another, usually without permission, and using them to raise their own status or gain more power.

The nickname of “The Melting Pot” was given to American in the late 1700s for its romanticized potential to create a homogenous mixture of cultures to create one all-embracing American culture.

However, white Americans have a history of taking things and claiming them to be their own and are bearing the brunt of the wave of social media justice surrounding cultural appropriation.

People who advocate against cultural appropriation, among other things, have been dubbed by others as “Social Justice Warriors,” or SJWs.

On Tumblr and Twitter, SJWs have been tagging posts of images and stories where predominantly black, Native American and Asian cultures are shown in a way that they deem unfair or insensitive with “#culturalappropriation.” And the justice comes swiftly.

But, when does a culture or subculture become part of all-American life?

Sociology professor Pamela Chao has been teaching a variety of sociology courses at American River College for 19 years, including the course Minorities in America.

“I think it’s important to look at the notion that culture is always transmitted and shared,” Chao said.

“It’s only when you start looking at power differences and oppression and all of those other kinds of way in which there’s differences in power in the relationship between the person taking the culture and how the culture has been used in the past.

“That has everything to do with cultural appropriation.”

The most popular cases of cultural appropriation come about from fashion displayed on the runways in Paris or on the heads of young white girls.

In January, Mallory Merk, a white teenager from New York, posted pictures on her Twitter account of herself with head full of box braids, a hairstyle usually worn by black women.

Presumably, Merk didn’t anticipate the backlash that developed over her ‘do.

Jamilah Lemieux, a black, female writer and social justice activist named as one of the 55 most influential women on Twitter by American business magazine “Fortune,” tweeted to her nearly 46,000 followers that, “something as trivial as a hairstyle can be triggering or upsetting, Let us have it. This goes to everyone.”

Lemieux also tweeted, “Our bodies, our music, our fashion, our lips, our hair … everything about us is ripe for the picking by people who do not treat us well … This is not happy cultural mixing where you bring the blonde and I bring the braids, because you hate me and tell me as much all the time.” 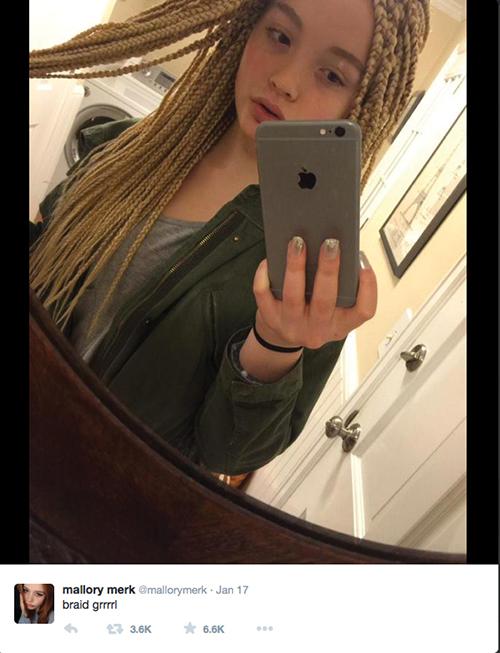 Thirteen-year-old Mallory Merk shows off her box braids, a hairstyle usually worn by black women, in photos she posted to her Twitter account in January. Merk received backlash in the form of tweets in response. 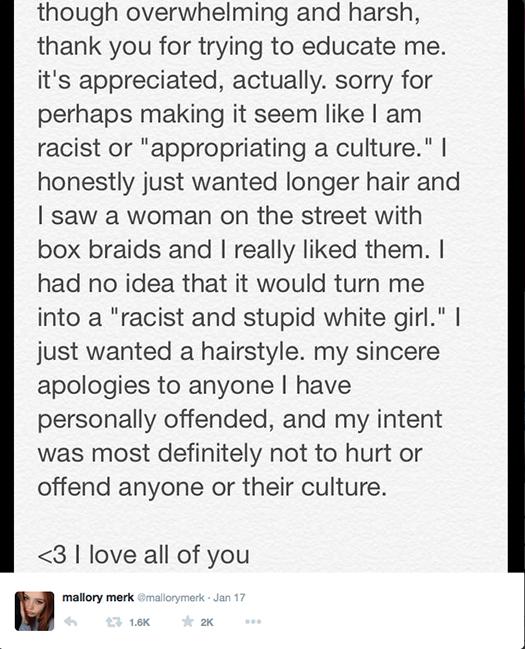 Merk claimed innocence and apologized tweeting, “Though overwhelming and harsh, thank you for trying to educate me … Sorry for perhaps making it seem like I am racist or ‘appropriating a culture.’ I honestly just wanted longer hair and I saw a woman on the street and liked it.”

Canadian-based music festival Bass Coast recently banned all of their patrons from wearing Native American-style headdresses and “feathered war bonnets,” or anything resembling them, onsite.

The festival’s Facebook page announced the official declaration saying, “We understand why people are attracted to war bonnets. They have a magnificent aesthetic. But their spiritual, cultural and aesthetic significance cannot be separated.”

The appeal of something ornamental and, to most people, beautiful, overpowers the need for understanding of any aspect of the culture it’s being taken from.

“When folks are marginalized, they stand out … Then there becomes this exoticisnation,” said Chao.

“If you’re into something, find out what it’s about. I would never want to say that I absolutely adore a certain way of life without knowing something about it.”

However, it is not always the conscious fault of an individual. In the event that a white male is born in a place where hip-hop culture is abundant, it’s easy for him to latch onto it believing it to be his own without fully knowing its origins.

“Culture is hard to see because we are so immersed in it,” Chao said. “Trying to ask a person to explain their culture is like asking a fish to describe water. It’s just the world in which you live.

“A lot of times, if one is normalized in society, then often times it feels like you don’t have a particular culture. It’s just normal.”

Professor Chao feels the notion that everyone is expected to be conscious and aware of underlying racism constantly can be difficult to achieve.

“I think that we need to give each other some space, but at the same time understand that there has to be a way in which people then can explore, make mistakes, to question.”

1 Comment on "Your culture or mine? : Analyzing the misuse of sacred cultural items"