Did it hurt when you fell from heaven?

I seem to have lost my phone number. Can I have yours?

Did you sit in a pile of sugar? ’Cause you have a pretty sweet…

“Pickup lines are bullshit. It’s not you, it’s just a line.”

Pickup artists, commonly known as PUAs, consider themselves masters of the art of “the pickup.” Specifically, being able to attract or pick up the interest of any woman.

The term gained great popularity with the 2005 release of the non-fiction book “The Game: Penetrating the Secret Society of Pickup Artists” by author and journalist Neil Strauss.  The book chronicles the author’s real-life experience entering the subculture of seduction.

The television network VH1 also helped make the term mainstream through its reality TV show, “The Pickup Artist” hosted by Erik von Markovik, more commonly known by his stage name, “Mystery.” During the show, contestants would be given challenges in which they would have to test their women-wooing skills. 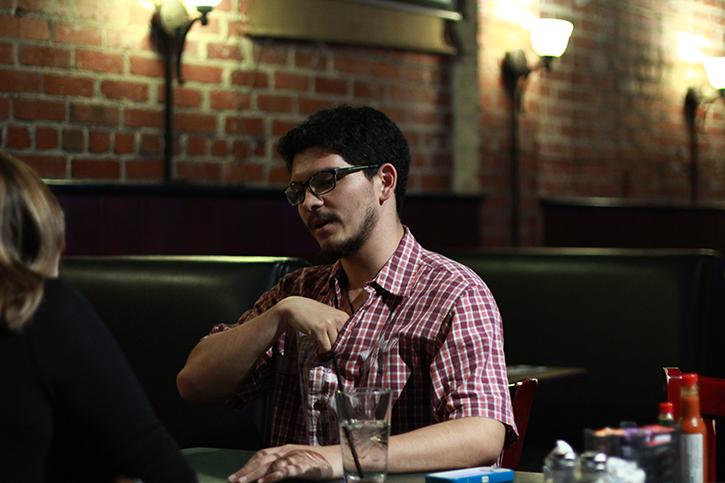 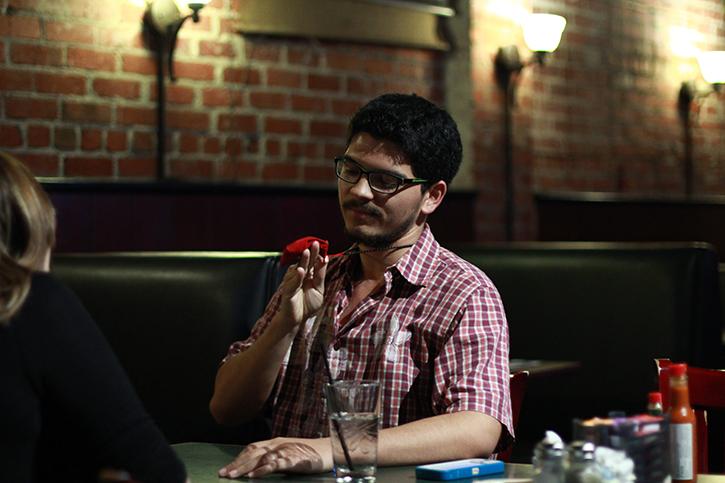 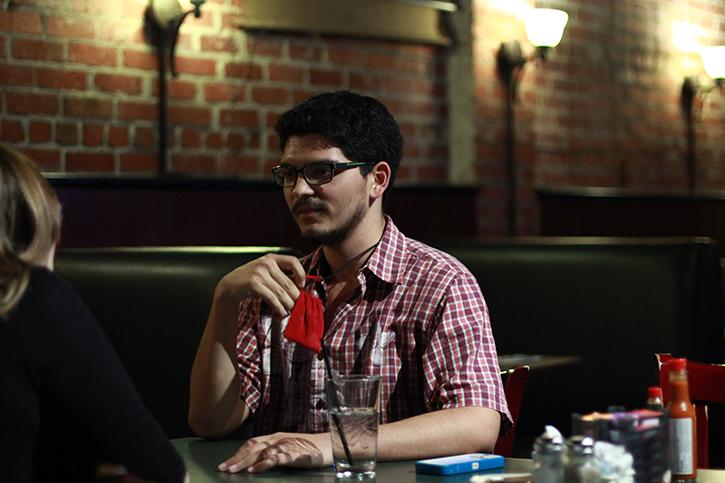 Pickup artist student Kevin Brewer demonstrates a technique of peacocking by revealing a red velvet bag filled with pyrite hanging around his neck.

After Burks had broken up with a girl he had been with for nine months, he was worried that his diagnosed anxiety would get the better of him in the dating department.

So, Burks decided to research his options on how he could overcome his fears and learn how to find a companion.

First, he read “The Game” and soon figured that he could either just read the book or actually go out and try it.

Barton, who sometimes goes by his alternate name “Double B,” is a 34-year-old owner of a tech startup in Sacramento by day and a self-proclaimed pickup artist advisor by night.

“I never had a date in high school,” Barton said. “I always struggled talking with girls and figuring out how to flirt. Even when I was attending American River College, I didn’t quite get it.”

Barton founded his website Sacpickup.com in 2013 and considers himself qualified to teach other men the proper way to talk to, flirt with and pick up women in Sacramento because of his personal experiences and because of his understanding of the art of pickup from reading books — including the one that helped him realize why he was struggling, “How to Succeed with Women” by David Copeland.

Barton charges his clients $40 for his three-hour mini classes that have up to a dozen people attend them at a time and $225 for a one-on-one personalized six-hour session.

In his mini classes, clients can learn certain pickup tactics and methods like peacocking: placing an item on yourself to attract a woman’s attention and get a conversation going.

Kino, making physical contact with the woman, and negging, a flirt wrapped in an insult, are two common things learned in the first lessons Barton teaches his students.

During a personalized session, Barton often walks with and observes his client around a college campus like Sacramento State University and American River College as he demonstrates his approaches.

However, Barton says what he’s teaching isn’t anything new.

“There’s nothing in my class that you can’t find somewhere online, but my class is very personalized,” Barton said.

Burks says he was surprised how receptive people were during his first personalized lesson with Barton while walking the campus of Sac State.

“I really want to just get out there and learn how to talk to people even without the intention of going out with someone,” Burks said.

Burks was diagnosed with an anxiety disorder at the age of 22 and says he has always had issues with maintaining conversation with strangers, and not just women.

“It’s embarrassing to admit. I get shaky and am at a loss for words. I’m just glad I’m taking the steps in trying to overcome my anxiety with this,” Burks said.

“I want to be who I really am. I’m a cool, good person. I have interesting stories. I have depth. This anxiety, this insecurity, this self-doubt all make me question myself.”

Barton says he can help students make connections with women but every girl has what he calls a “bitch shield.” He works with his clients to help them break down this invisible barrier in an attempt to connect with or pick up a girl. 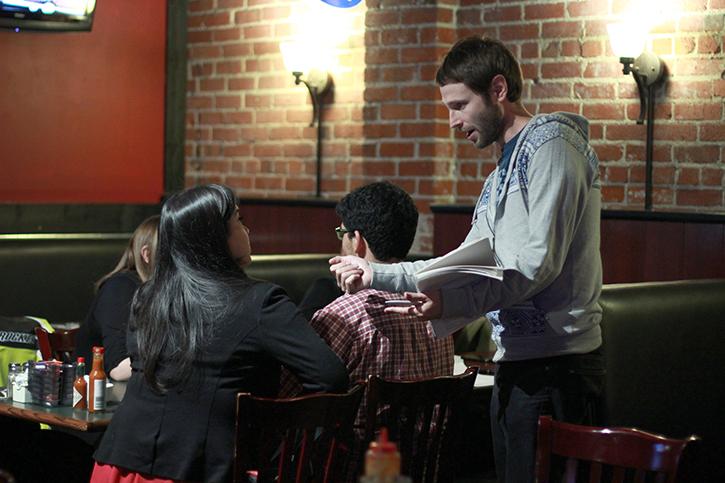 Sacramento pickup artist Bryan Barton, right, talks with a woman after a free observation class he offered to his students during a speed dating event on Feb. 11, 2015 in Sacramento. During the event, Barton and his students critiqued men on their interactions with women.

One of Barton’s former students doesn’t entirely agree with all of the methods pick-up artists usually use to attract women.

Stephan Sanders, a 22-year-old originally from Dayton, Ohio, says a lot of what pickup is, is too gimmicky for his taste.

“What (Bryan) teaches is pretty good, honestly. It’s just his personality that not everyone might like,” Sanders said.

“Bryan is confident, but he can also come off as crude or a little too much for some people. In my favorite book, “Mode One” by Alan Roger Currie, he never talks about negging or peacocking or touching a woman’s leg. His methods are less gimmicky and more straight up unapologetic honesty. Jest tell the woman directly what your intentions are and go from there.”

Sanders, who was a high school track athlete and is currently working toward being a personal trainer, believes the key to success with women is confidence and compares it to working out a muscle: “It takes practice to make it good.”

The PUA culture has often been portrayed as a culture of deceitful men who use cheap tricks to try to lure women into getting into bed with them, but Sanders disagrees, saying he wanted to be able to approach women, unlike those who are seeking to sleep with them as soon as possible.

“These guys all have similar characteristics. They don’t really have respect for women. They can hide their disrespect enough to get a girl to sleep with them … It’s just disrespectful toward women. You need to have a genuine love for women. Care about their emotions, their love, their passions.

“The ‘men are pigs’ mentality can make men more ashamed to be men,” Sanders said.

“If men aren’t allowed to express their sexuality and they have to mask their feelings, they could be forced to bury them and that’s not healthy.”

Sanders says he’s figured out the key to pick up: Humour, confidence, street smarts and developing some kind of skill.

“Some guys think they’re not enough. They just need to learn to be comfortable with themselves. How is a girl supposed to like you if you don’t like yourself?”

“If you don’t love life and take risks, no one’s going to appreciate you for you.” 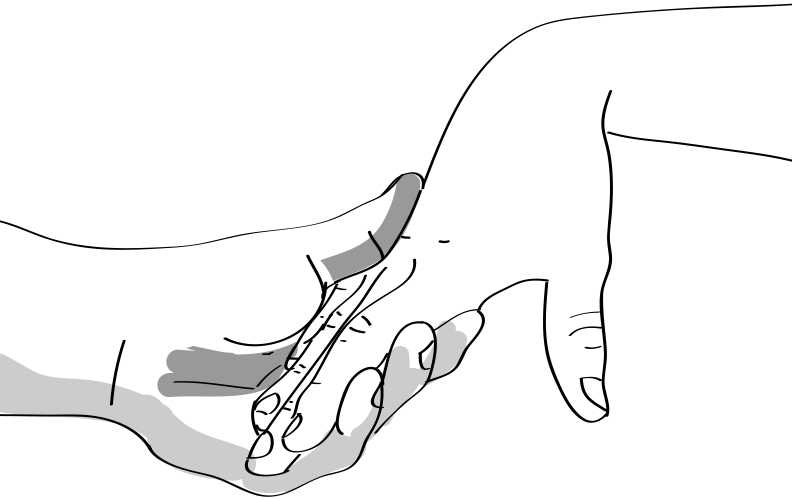 KINO : Short for kinesthetics, meaning physical touch. Many pickup artists see kino as a milestone that can lead to recognition of IOI’s or indications of interest from women. 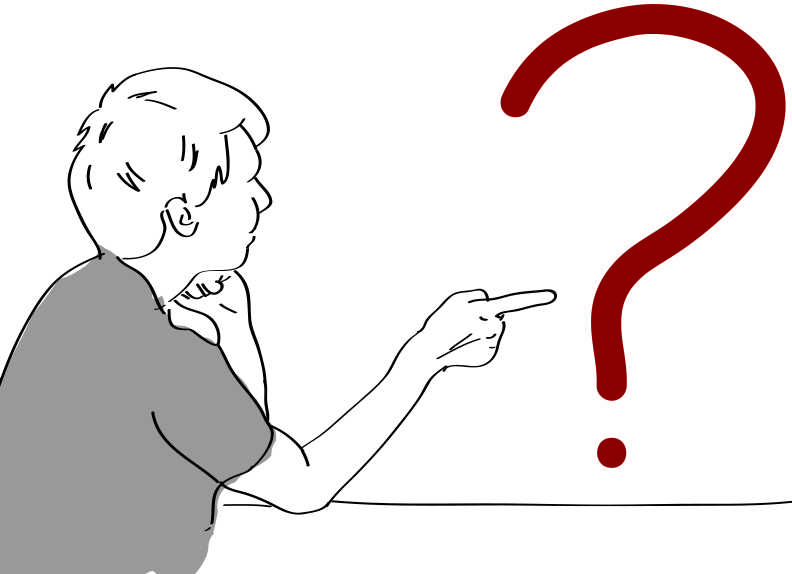 NEGGING : A controversial practice of wrapping a compliment in an insult. Sometimes used to catch a woman off guard and peaque her interest in the man. Examples include, “I like women with weak/strong chins,” and, “You don’t have to wear so much makeup.” 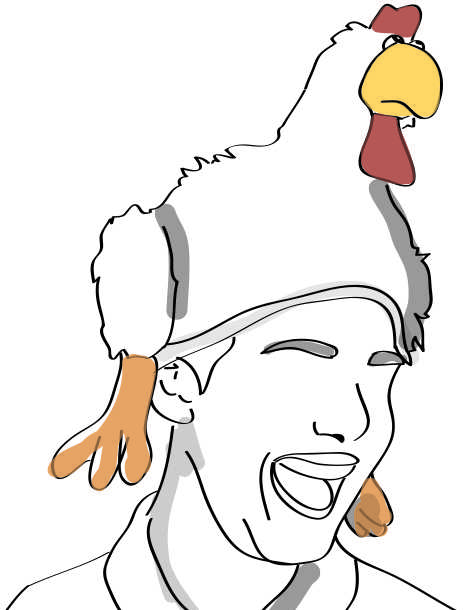 PEACOCKING : Dressing for the sake of attracting attention. Some wear fuzzy hats or t-shirts with slogans that may catch the eye of and start a conversation with a woman. 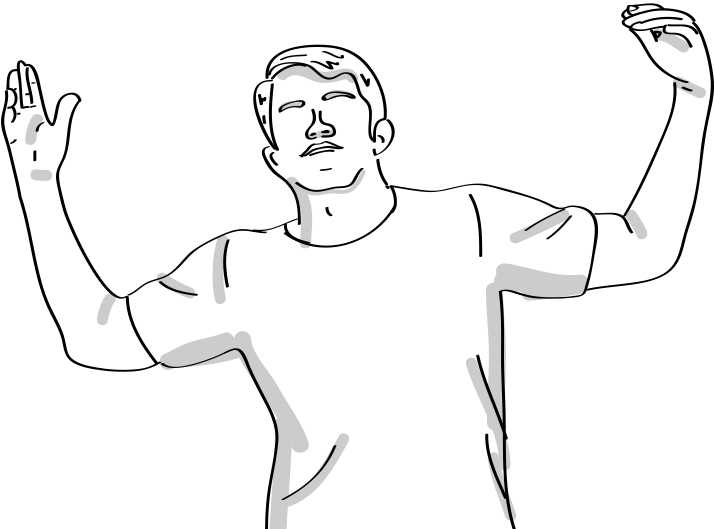 DHV : Meaning “Demonstration of Higher Value.” Talking about one’s volunteer trip to Peru to build a school for blind orphans can build up the perception of importance in a potential romantic companion.

2 Comments on "The Art of the Pickup: A look into the culture of Sacramento’s pickup artists"