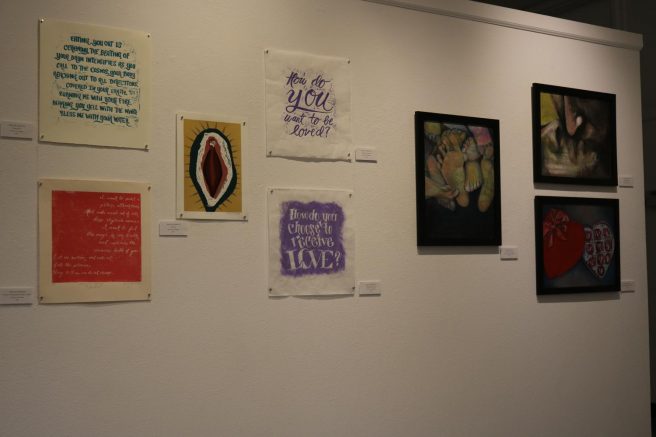 The Kaneko Art Gallery debuted its first gallery exhibit for the spring semester on Jan. 29. “It’s Complicated” features art from artists across Sacramento.

Artist Garbow is a Michigan native who moved to Sacramento three years ago. He said his watercolor technique is entirely self-taught.

“One of the aims of these pieces is to show the balance of the mundane with the more unfamiliar aspects of a modern, gay relationship,” Garbow said.

He used references from photos of himself standing in for subjects in scenes. He even included his husband in his piece “Quality Time.”

Munoz-Moore is also a self-taught artist who says he gained experience from previously being a commercial makeup artist, stylist for television, film and print for 20 years before retiring to become an artist full-time. He explains why the show is beneficial to American River College.

“‘It’s Complicated’ is showing the viewer that there are many approaches to love and relationships, and because yours may be different doesn’t mean it sucks,” Munoz-Moore said.

The Gallery also features The Unsent Project from 2015, which was started by Northern California artist Rora Blue. The project displays submitted text from people about their first love. The Unsent Project has been featured in many news outlets such as Refinery 29, Teen Vogue, Cosmopolitan and many more.

This is Marquala Brown’s second semester on the Current and her first as the Social Media Editor. Next semester, Brown hopes to graduate with an associate’s degree and transfer to a four year university.