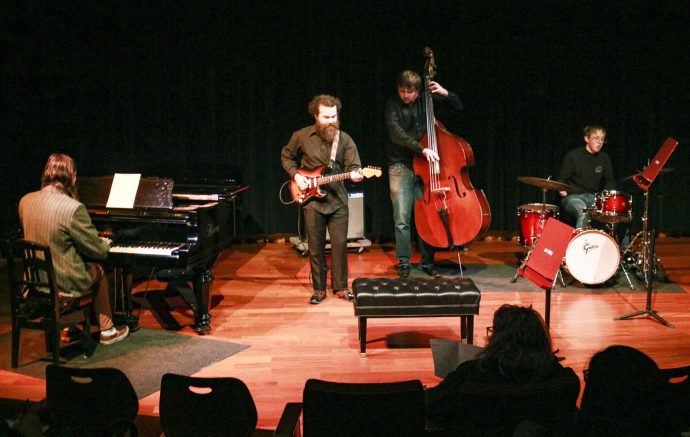 Piano keys send a melody through the halls of the American River College Fine Arts Building to a darkened recital hall, with its only lightsource above directed on a lone pianist practicing before the start of the recitals. Nearby, a table covered in paper slips is slowly being cleared by the students, as the slips are to be used for the music students to comment on the performances. The pianist finishes and exits to a nearby room. Ralph Hughes, director of choral activities, addresses the audience and introduces the first musician.

“Applied music students are required to go to four out of five concerts and leave comments on how their fellow student performers did,” Hughes said.  “[The recital performers] work in collaboration with their teacher, using their instrumental focus, the teacher assigns challenging literature that is achievable in a semester and they add to it next semester so they get well rounded.”

Three music students perform for their Applied Music Recitals to showcase what they’ve learned at the ARC Fine Arts building on Dec. 2, 2019 as a form of their final.

Music major Miyan Grasso performed first on an acoustic guitar. The first piece he played was very slow paced on the minor scale, with long plucks and slow methodical guitar strums that were played with emotion. It had a dark tone. The piece Grasso played was called “Etude No. 3 (Lament)”  written on guitar by his father, Matthew Grasso.

“It felt like I delivered the message, I kept the energy going, I didn’t fall apart and hopefully I connected to the audience,” Grasso said.

Next, Grasso played “My Favorite Things” by Richard Rodgers, which lightened the mood with its joyful tune.  Grasso then left the room, while the next musicians entered.

Four music students entered the lighted area, and took a hold of their instruments. Ryan Woempner held a standing bass, while Michael Warner sat down behind the drum set. Kevin Hamby sat behind the piano.  Woempner, Warner and Hamby were backup, however. The person who this recital was assigned to was Jazz major Andrew Little, who played the jazz guitar.

The two pieces that they performed were “Autumn Leaves” by Joseph Kosma, and “Blue Bossa” by Kenny Dorham.  “Autumn Leaves” had a much lighter tone, befitting the season of falling leaves. “Blue Bossa” was a little faster-paced, but the applause of the audience suggested the band did very well.

“I feel pretty good about [the performance], I have some good guys backing me up,” Little said.

The final performer for the recital was vocalist Min Zhao, whose voice quieted the room. Haruko Taitani Thomas helmed the piano.

“Christopher Robin is Saying His Prayers” is the title and the ongoing theme, and is usually a poem but Zhao finished the recital singing, to the applause of the audience.

“It was short and sweet. Everyone did a great job,” Hughes said.

The final Applied Musical Recital is on Dec. 5 at 7 p.m. at the Fine Arts Building at ARC, and is free.

Be the first to comment on "The sounds of finale: Students showcase their work at applied music recital"