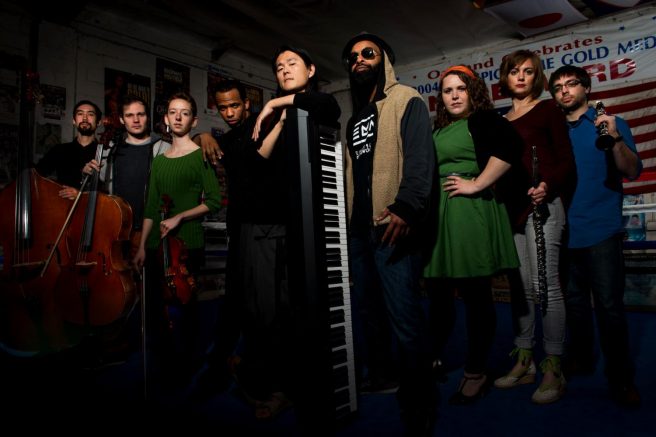 Ensemble Mik Nawooj will be performing with the American River College Orchestra at ARC on Dec. 4, 2019. (Photo courtesy of Pat Mazzera)

The American River College Orchestra will perform with the hip-hop ensemble Mik Nawooj on Dec. 4. The name of the ensemble comes from the leader’s name, JooWan Kim, according to Kate Wells, second violin in the ARC Orchestra.

Wells, who has rehearsed with Mik Nawooj multiple times, said that the ensemble has a clarinet, a flutist, a soprano singer, a drummer, and an M.C. Wells said that Kim and Steven Thompson, the orchestra’s director, worked together in the past and have been trying to arrange this collaboration for a few years.

The ARC Orchestra has never collaborated with a hip-hop group before, but Wells says this isn’t the first time they’ve worked with artists from other genres.

“One of the things that I think is really unusual about the ARC Orchestra is Dr. Thompson’s willingness and excitement about collaborating,” Wells said.

Last year, the ARC Orchestra collaborated with a tango group, and a salsa group.

All the pieces that will be performed on Dec. 4 are original compositions by Kim, originally written for a smaller instrumentation. Wells said that Kim spent the summer adapting the pieces for ARC’s 70 piece orchestra.

“Nobody really knew what to expect [from the compositions], but the music is just gorgeous,” Wells said.

The last piece is a concerto titled “Opening of the Second Gate.” Wells said that Kim explained during rehearsal that the song is about him processing the loss of his mother, and that the insight has helped the musicians understand the emotion they’re trying to convey. The piece is a concerto featuring classical trombone played by Thompson, and an M.C. rapping.

“I think it’s going to be a joy to listen to,” Wells said.

Wells said that there was originally some difficulty in reading the music Kim presented them.

“[Kim will] say ‘okay this is a trap piece,’ and we’ll all just look at each other like what the heck is that?,” Wells said. “There’s one place where the sheet music says ‘slow boom-bap’ and I think if you’re a hip-hop musician you know what that is, but if you’re a classical musician, you really don’t.”

Wells also said that once Kim explains the terms, there’s no issue.