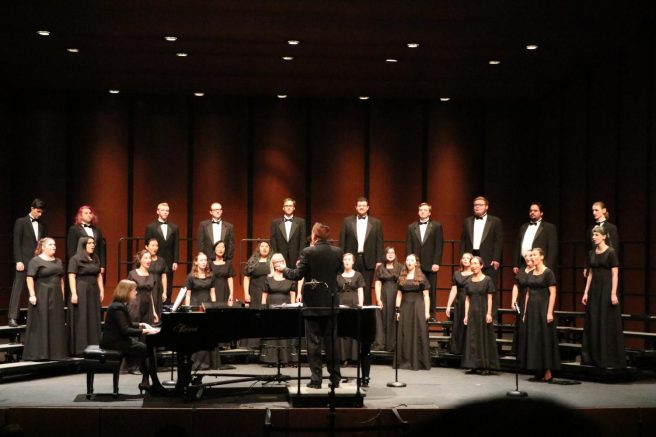 At the American River College main theatre on Nov. 5, many people gathered for a special performance. The auditorium itself was dark, but the stage remained lit.  After people filed in and filled the seats, quiet conversations from the crowd emerged, excited for the evening’s event.

Silence filled the room when two figures entered the stage: Ralph E. Hughes, conductor of the ARC Chamber Singers and the ARC Concert Choir, and Heidi Van Regenmorter, accompanist.  Hughes made introductions and then the choir filled the stands behind him. Regenmorter sat down at the piano, and Hughes prepared to conduct. The choir began to sing.

The ARC Concert Choir kicked off the event with pieces like John Rutter’s “For the Beauty of the Earth” and Kevin A. Memly’s “Count on it!” They also gave a fresh twist to a traditional American folk song “Cindy,” arranged by Carol Barnett with constant shifts of meter, foot stomps and clapping.

“It has a lot of multimeter, so instead of it being like rock and roll, you know everything has got four beats in it, and it is a constantly shifting meter so they did pretty well on it,” Hughes said.

The choir finished with a Chinese folk song arranged by Hyo-Won Woo titled ”Mo-Li-Hua,” which in English translates to “Jasmine Flower.”

The next performance was the Bella Vista High School Madrigals conducted by Wendy Carey.  They performed “Hard by a Fountain,” arranged by Hubert Waelrant, “Shenandoah,” arranged by James Erb and “Ding-a Ding-a Ding,” by Greg Gilpin. The final number was a delightfully silly song by PDQ Bach titled, “Throw the Yule Log on Uncle John.”

After Bella Vista, the Ponderosa High School Concert Choir entered. They were conducted by Jolynne Alger, and performed “Bring me Little Water, Silvy” by Huddie W. Ledbetter, which was arranged by Greg Gilpin.  Afterwards the Ponderosa Chamber Choir was joined by the Concert Men, which was accompanied with Vince Nestripke. They performed “Harriet Tubman,” written by Eloise Greenfield, and music by Rollo Dilworth. Ponderosa’s Chamber Choir ended their segment with a Japanese poem set by Ruth Morris Gray titled “Hisakata No,” and Raymond Wise’s “We’re Marching to Zion.”

The final leg of the event was performed by the ARC Chamber Singers, conducted by Hughes once again. They performed Orlando di Lasso’s “Domine, labia mea aperies” which is Latin for “Lord Open My Lips,” and Geronimo Gonzalez’ “Serenissima una noche” which is Spanish for “One Night in Venice.”  The group then performed a Filipino (Maranao, which is Moro people inhabiting the area around Lake Lanao and certain parts of central Cotabato province, Mindanao, Philippines, and northern Borneo.) children’s song called “Pokpok Alimpako” (Box Office) by Francisco F. Feliciano.

Hughes said this song was one of his favorites.

Afterwards, the ARC Chamber singers sung a Cornish folk song arranged by Gustav Hoist called “I Love My Love.”  The finale song was Eric Whitacre’s “With a Lily in Your Hand.”

The crowd appeared to be happy with the total performance. With everyone clapping and focused on the performers, Hughes was very pleased.

“I think all the choirs went very well, we don’t really view things as a competition, it’s really exciting when everyone does well,’” Hughes said.  “And based on the crowds applause I think they had a great time”

Chamber bass singer and music major Miyan Grasso said he thinks that they can still improve.

“We have some improvements to do, but we did well, but we have more to work towards,” Grasso said.

Hughes and Grasso encourages students to try out the choir for multiple reasons.

“Come on out and have some fun with us, you do get two units of credit that is transferable to most universities and you might meet someone who you might maintain a lifelong friendship with,” Hughes said.

The Winter Choral Concert will take place at the ARC Main Theatre on Dec. 10 at 7:30 p.m.