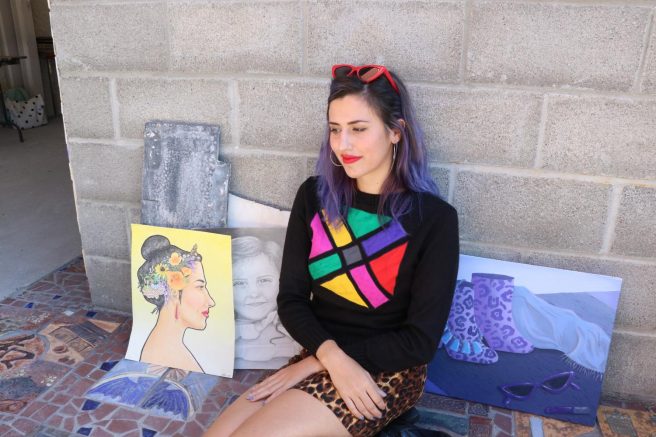 Art major Cat Alfstad sits between the art buildings among her own art (self portrait titled "Cat" (left), "Lucy Rose (middle) and "But Make it Fashion" (right) at American River College on Oct. 17, 2019. (Photo by Ariel Caspar)

Between the art buildings at American River College, Caitlin “Cat” Alfstad sits comfortably amongst the in-progress art projects created by other students. She is wearing a worn-in, oversized knit blazer, an old Franz Ferdinand T-shirt stained with paint that she’s claimed to have owned since 2004 and classic Adidas running shoes.

Everything she’s wearing, with the exception of her leggings, has been thrifted. In fact, the vast majority of her closet contains thrifted clothing articles that she’s collected since 2012.

“Basically my whole closet is thrifted,” Alfstad said. “I started with thrifting because I found it was more creative. The clothes were different and I could really make it my own.”

Alfstad, 27, is a second-year art student at ARC, a thrifting expert, a wife and a mother of two daughters. She was also selected at the beginning of the semester to take over the ARC News Today Instagram account to provide student-generated posts about student fashion. Somehow she manages to juggle all of her responsibilities while still giving herself room to be creative with her fashion and art.

Alfstad lives and breathes art and fashion and she says they’re part of her daily creative expression.

From a very early age, fashion was Alfstad’s first form of self expression. She said her mother always promoted and demonstrated freedom with clothing and style, and that allowed Alfstad to be unapologetic with her fashion choices as well.

“When I grew up, that was my norm, so it was very natural for me to gravitate towards that specific form of self expression,” Alfstad said. “I have a plethora of my own insecurities but what I wear is absolutely not one of them. I just do not care what anyone thinks about my clothes because I like it.”

Alfstad also finds inspiration through others, mainly the iconic Gwen Stefani. She said she admires Stefani’s bold fashion choices and was very influenced by her when she was young. Alfstad says, like Stefani, she prefers to style things to her own taste and go against the grain of what’s typical.

“I really absorbed the way she would mix things,” Alfstad said. “She took such unconnected things and mixed them in a way that was so original and cool and I really connected to that.”

Alfstad said when she began thrifting she preferred it over purchasing from department and retail stores because it allowed her to pull from a larger pool of clothing options. With more options, she could find specifically what she liked and how she wanted to put it together. 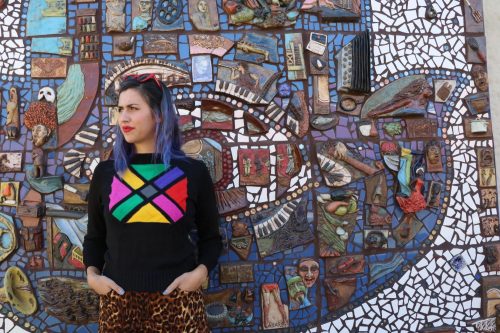 Art major Cat Alfstad rocks her thrifted outfit, (sweater from Goodwill, skirt from Nasty Gal, sunglasses from Freestyle Clothing Exchange) in front of a mural on the Fine Arts Building at American River College on Oct. 17, 2019. (Photo by Ariel Caspar)

As she got older she said it became cost effective as well. She said she appreciates that thrift stores are rooted in community and social service and she’d much rather be spending her money where she knows it will be used to meet a need.

She also prefers thrifting because it is better for the environment. Thrifting prevents unnecessary clothing from sitting in landfills, prevents large amounts of resources being used and wasted, prevents pollution and it decreases the worldwide textile demand, according to the University of California, Berkeley’s Student Environmental Resource Center (SERC).

As thrifting became her main clothes-shopping habit, she got into very low maintenance upcycling of the older, more worn-in clothing items that she found.

“Upcycling is taking something old that kind of looks ugly or dingy on its own and putting it together in a way that brings it back to life,” Alfstad said.

Her upcycling or revamping is more of a casual or simple styling hobby than extreme fashion altering. Her alterations are simple, such as cutting the sleeves off a shirt, or removing the shoulder pads from a coat or changing jeans into shorts.

According to Alfstad, she was sought out by Scott Crow, ARC’s public information officer, at the beginning of the semester to take over the ARC News Today Instagram account to place a spotlight on student fashion for the first couple weeks of school.

According to Crow, who spoke to the Current via email, Alfstad was chosen in order to provide a student voice on the account.

“We reached out to Cat as we wanted to offer more student-generated content on our channel,” Crow wrote. “Cat has done a great job for us and we appreciate her work! We chose [her] because of the good work she had already done on IG.”

Alfstad would find a student wearing an interesting outfit and post a photo of them to highlight students on campus and promote clothing being a form of self expression.

“It connects the idea of having room here [at ARC] to be who you are and finding your own little community within this larger community,” Alfstad said.

Although she has fun with fashion and styling, she says it is just a form of expression. Her real passion lies in her art, and she plans to transfer to the University of California, Berkeley to expand her abilities and eventually get a master’s degree in art therapy.

Alfstad said she has an interest in many artistic styles. She enjoys realism because it is challenging. She is also drawn to surrealism because of the abstract dreamlike style it produces.

“The dream effect that surrealism has is something that allows me to explore the abstract thoughts and feelings that I might have in a way where I’m not restricted,” Alfstad said.

Her favorite artistic period or style is art nouveau, a French art movement that occurred in the late 1800’s, that had a revival in the 60’s with more of a bohemian style.

She said colors are her main form of inspiration and expression and they are a great way to express daily moods.

“I like to say that I think in color, so a lot of times… I have trouble with thoughts that are a little more emotionally based and getting it into words,” Alfstad said. “So art kind of helps me create the metaphor that I can then translate into how I want it to be seen,” Alfstad said.

History major and Alfstad’s husband, Erik Alfstad said watching her creative process gives him confidence that she will succeed at whatever she puts her mind to.

“I am the least creative person in the world and so it’s really cool,” Erik Alfstad said. “Although I don’t often understand it, I get to see her express herself in more ways than one and to show her talent in the arts.”

Alfstad says she plans to use her desired future career as a teacher and art therapist to benefit disadvantaged communities who do not have access to such rare resources.

“That is what is very attractive about her, that she is very determined, very focused, she absolutely knows what her goal is,” Erik Alfstad said.

For now, Alfstad says she is focusing on school and being a mom. She says fashion will always be a part of her life and will be her everyday form of expression.

“With fashion I found it was a really cool, creative outlet and that the way you put your outfit together can mean so many different things,” Alfstad said. “It’s an expression of who you are and you can change that every day.”