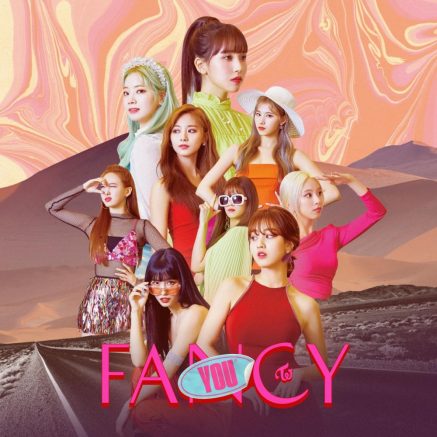 Lately Korean pop idols are all over American media; from the ridiculously successful award-winning BTS, to Blackpink’s guest appearances on talk shows and collaboration with chart-topper Dua Lipa, the American mainstream has become much more familiar with the stars of the K-pop idol world.

In the next few months the recording-breaking group Twice will be performing in the U.S. for the first time.

The long-awaited announcement of Twice’s international tour, including stops in the U.S., was followed by the release of “Fancy You,” a six-track extended play and their seventh mini album, on April 22. Since the release of the EP, the group’s cumulative album sales have made them the best selling girl group in Korea of all-time.

The nine-member pop group — composed of Jihyo, Dahyun, Jeongyeon, Chaeyoung, Tzuyu, Nayeon, Sana, Mina and Momo — debuted in 2015, after they participated in the music reality show “Sixteen.” The show was made by JYP Entertainment, known as one of the ‘Big Three’ K-pop music media labels in South Korea, and the Korean TV channel Mnet.

Artists under JYP Entertainment have been well-received by international audiences in the past, sometimes collaborating with American and European writers, producers and choreographers. “Fancy You” includes production by English pop musician Charli XCX.

The first track “Fancy” starts the album off boldly. The overall feel of the song sets the tone of the EP with a more mature sound for Twice, though there are still familiar Twice vocals, such as the cheers. The group has said that with this release, the singers wanted to freshen up their image, leaving behind some aspects of their cutesy reputation.

“Fancy” is musically more coherent than most of their other singles. The lyrics in the chorus like ‘Tell me, I’m the only one, baby I fancy you,’ are also indicative of the group growing up — a clear message compared to some of the juvenile choruses from previous releases with cringe-inducing lines like “me likey likey likey.”

Twice singles are made distinct with what some of the internet calls the “killing part” — an emphasized word or phrase in the group’s song, said by an individual member in an especially catchy or cute way, and usually paired with an easily replicable dance move.

Much of their viral fame came from videos and gifs of these parts from their performances and TV shows, with references to the song made by artists and celebrities far beyond Korea and the pop fanbase. The “killing part” in “Fancy” is done by Chaeyoung, whose name trended on Twitter worldwide after the release of the music video.

Excluding Twice’s Japanese releases, their cosmetic styling and fashion in the “Fancy” music video is their most mature yet. Twice was out of the spotlight for six months before the EP, and this shows in the choreography. The dance for “Fancy” is an impressive display of the girls’ synchronization and endurance with their legwork, with cute flourishes like a group pose constructing a star with their arms.

The third track was discussed by fans online before its release due to its production; the music was produced in part by electro pop artist Charli XCX, with lyrics written by Twice’s leader Jihyo. In “Girls Like Us,” the vocal dissonance between the wailing and the rest of the girls’ voices is a welcome departure from their usual sound, and makes this song the most experimental on the album. The mixing of their voices in this song remind me of the wispy, dreamy pitch of synth-pop artist Grimes.

This song is by far my favorite off the album, especially in terms of lyrics, which are available translated from Korean to English on the lyric site Genius. Written by the group’s leader Jihyo, the lyrics are positive encouragement to girls, singing to “Remember the starting point of that first dream / the newness of it all that was felt,” and “Oh girls, do what you want / you’re going the right way.” I’m always excited to see idols involved in the creative process, especially when they get to write lyrics, which isn’t as common in K-pop as it is in many genres.

The next song starts up with my favorite vocalist, Momo, who has an increased number of lines in this EP. I could tell from the first listen that I’d wind up drunk dancing to the funky beat in “Hot.” Dahyun’s rapping style in this song is clearly inspired by recent flow trends in rap and hip-hop in the United States. This song doesn’t have much in the way of meaningful lyrics, not that it would need them when it is just a song to get down to.

“Turn It Up” reminds me of a lot of songs, but it especially reminds me of “Rollin,” one of my favorite songs from Twice’s first full album, “Twicetagram,” standing out with its distinctively 80s sound. Jihyo’s voice adds some soul to this slower dance song. I’m a sucker for cheesy songs about dancing — I’m bound to like almost any song called “Turn It Up.”

“Strawberry” is a light, softer, slightly bubbly song heavy on autotuning. “Strawberry” can be described by the chorus: “so sweet, so sweet.” While this song works as a sort of filler for the album, and I originally referred to it as “a good song to listen to while looking for something to listen to next,” it has grown on me since.

Overall I enjoyed the album, though I wish Twice would release another full-length album. They haven’t released a full Korean album since the two in 2017, and a Japanese album last year. This EP and single reminds me of a darker or more mature version of their single “Dance the Night Away.”

“Fancy” reached a second spot on Korean album sales charts. Though it didn’t do quite as well as their previous streak of chart topping singles, Twice added to their long list of records and achievements with this EP.

Fans are looking forward to see what Twice releases next, and I know I’m crossing my fingers that I will get the chance to be in the crowd to see them in Southern California this summer.

Student journalists are not the enemy

Be the first to comment on "Review: Twice gets ‘Fancy’ for world tour"