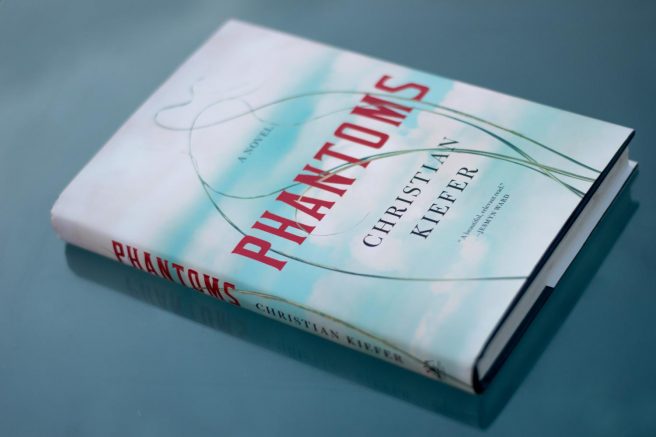 “Phantoms,” by American River College English professor Christian Kiefer, is a dreamlike narrative about the incarceration of Japanese-Americans during World War II and how it affected the people in Newcastle, Calif. (Photo Illustration by Patrick Hyun Wilson)

After returning from the Western front during World War II, Ray Takahashi visits his childhood home in Newcastle, California. While there, he visits old acquaintances, childhood friends and old neighbors from a life who are far removed from the life he was living in the August of 1945. However, his return is not entirely what it seems.

Author and American River College English professor, Christian Kiefer’s latest novel is based on conversations he had with Japanese residents of Newcastle. “Phantoms,” begins with Takahashi’s train ride into Newcastle that August. It is described as Takahashi’s final ride, however the reader is left in suspense, wondering where he went after arriving in Newcastle.

“I had the idea — which is to say the subject of the novel — for six or seven years. I knew there was a novel in this, I didn’t know exactly how to write it in a way that would be respectful to the topic … I thought the whole book would be in first person plural,” Kiefer said. “I tried to make a go at that voice and it felt incorrect very very quickly.”

While reading, one quickly comes to realize that the events of the novel are purposefully ambiguous.

In a sentence describing Takahashi’s homecoming, Kiefer writes, “‘It’s Sergeant Takahashi,’ he said. Or maybe he said nothing. After all, this story was told to us by the teens on their ladders and would they not want a kind of closing statement?”

“A fair amount of the text is about who controls the story, traditionally the story is told by the victors so we’re always in the process of uncovering the story under the official story,” Kiefer said.

The multi-layered historical fiction is told partially from the perspective of John Frazier, a Vietnam war veteran who learns Takahashi’s story through the other characters. The story is told from John’s interpretation of each of the different characters’ perspectives, creating a subjective atmosphere that obscures the story behind layers of narrative.

“That second chapter where it switches to John Frazier, having written that first chapter, was kind of my bailout parachute moment,” Kiefer said. “I thought, I need somebody else to be writing this book, somebody who’s fallible, somebody who’s not Japanese who has to therefore ask questions.”

In one scene, John Frazier reads the book, “The Confessions of Nat Turner,” a novel written by William Styron from the perspective of Nat Turner, who led a rebellion of slaves in Virginia in 1831. Styron drew criticism for writing the novel as a white author, but was defended by the famous black novelist and activist James Baldwin.

“That is meant as a whole nod to say, ‘I know I am stepping out on a thin frangible limb here in writing this book, please forgive me,’” Kiefer said. “In the acknowledgements I list as many writers as I can that people really should be reading instead of ‘Phantoms.’”

While the mystery behind Takahashi’s disappearance is the main story, there are a variety of side stories which Kiefer interweaves, adding depth to the world of the novel.

The further the reader follows the story laid out by Kiefer, the deeper the mystery becomes. “Phantoms” is a human drama ripe with tragedy and heartache, but not without moments of relief. The story is based on the people in Newcastle, both before and after the internment of Japanese people.

“There’s nothing [in Newcastle] to indicate that there was this vibrant population. In fact, the Japantown and Chinatown in Newcastle was exactly where the freeway now is, so there’s not even a single building left of it,” Kiefer said. “Instead we’ve got six lanes of blacktop running through what was a vibrant and interesting part of our community.”

The crux of the story revolves around the mysterious disappearance of Takahashi and discovering where he went after getting off the train in Newcastle. While the novel follows that story, it deals with the challenging social issues that serve as a backdrop to the drama.

Kiefer now lives in Auburn but was a resident of Newcastle while writing the book, and through the novel contends with the effects the town faced following their participation in the national displacement of hundreds of thousands of Japanese people during that time.

“It was really just a long process of thinking about, what does it mean to be in a place, what does ‘home’ mean, and how do we define who is and is not a part of our community,” Kiefer said. “Americans use the word ‘we’ in a very particular and focused way to indicate a certain kind of white, hetero, conservative American figure … it’s embedded in the very language we use when we’re talking about ‘ourselves.’”

Kiefer is an experienced writer. Since 2000, he has published three full novels and a variety of short stories and novellas, including “The Animals” and “The Infinite Tides,” both of which are full of suspense, and deal in subject matter that is further removed from reality.

“Phantoms” provides a suspenseful look in to the internment of Japanese Americans and the effects of World War II on the soldiers who fought in it. While the subject matter is grounded firmly in reality, the poetic nature of Kiefer’s writing lets the reader float between different time periods in the dream-like landscape of the book.

Kiefer doesn’t take the subject matter lightly but his writing imbues it with a sense of tragic grace. He describes each scene in a way that makes them seem like memories being passed from one person to another. The subjective quality of the writing creates just enough ambiguity to keep the reader digging deeper and deeper for answers.

As a professor the biggest advice Kiefer has for writers is simple: Read.

“Read everything. Read deeply and read broadly and read everything you can, that’s the only thing that matters,” Kiefer said. “Keep your butt on the chair, hands on the keys. I think you gotta write a million words before you write good words.”

“Phantoms” is available in hardcover and electronic book on Amazon and at local bookstores like Barnes and Noble.

Be the first to comment on "Review: Christian Kiefer creates dreamlike tragedy in “Phantoms”"