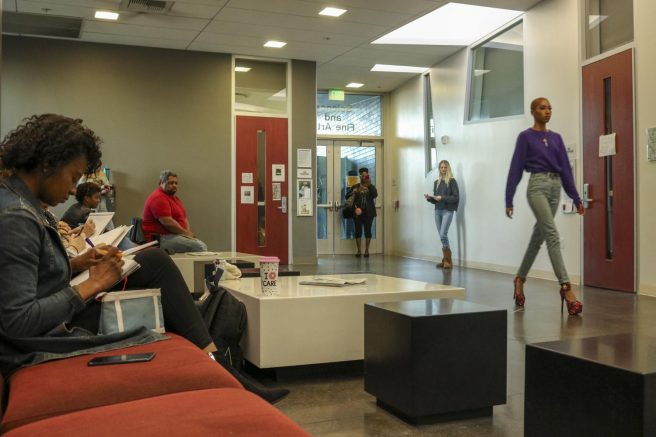 Model Eyona Young walks for the designers of this year’s fashion show, who will select models based on how well they believe they suit their collection. (Photo by Irene Jacobs)

American River College’s fashion department held a model casting call on Friday, Feb. 22, inviting people of all genders, shapes, and sizes to audition for the annual fashion show that will be held later this spring.

The aspiring models were asked to fill out paperwork before moving to the room down the hall to get their measurements and headshots taken. Once finished, they stood in the rapidly growing line to walk in front of the designers, who selected the models they felt best fit their designs.

Dyanne Marte, fashion professor and department head chair, is one of the figures that supervises the show and advises the designers.

“I was telling everyone that [the fashion show] is like a scaffolding process,” Marte said. “With scaffolding you’re building on these skills and we’re kind of here to suggest gently like ‘Have you tried this method, or this route, or this?’ because it is a lot of information.”

Tiffany Samson, nursing major at American River College, was one of the many women who lined up for the show.

“I feel pretty good,” Samson said, while waiting in the line to walk for the designers. “This is my third year doing the show. My passion for modeling [brought me here today]. Everything fashion, beauty, anything that has to do with that, I’m gonna be there.”

Tamika Huff, one of the designers for this years’ collection, kept her eyes sharp for models she felt would suit her collection best.

“[My collection this year] is very ethnic,” Huff said. “It has some West African culture vibes in it — African drums, palm trees … just the whole idea and the aesthetic behind it. So I want to keep everything ethnic and relate it into the culture.”

Marte, along with fashion professor Anne Dieu, are the the fashion instructors for the show. Marte described the fashion show as an amalgamation of the designers’ knowledge from their fashion courses put into motion.

“That’s what this is all about, for them to tap into everything they’ve learned and to be able to understand how to use that information and actually apply it,” Dieu said.

Both Dieu and Marte said they look forward to the fashion show, since it is where students are able to showcase what they have learned from the fashion courses.

“They’ve done all these class projects and done what the teachers have instructed them to do as far as projects,” Dieu said. “So now this is their chance to take all that information that they’ve learned and apply it to something that they want to do.”

The fashion department’s annual show this year will be titled “Homagony: Deconstructing Borders” and will be held on May 4.