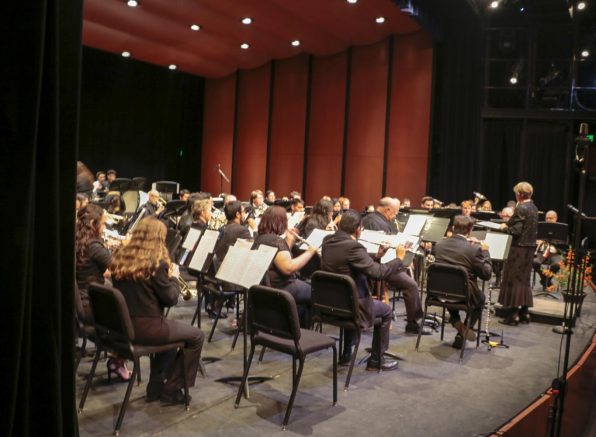 The Symphonic and Concert Bands performs at the “Rip-roarding Band Classics” at American River College on Nov. 8, 2018. (Photo by Hameed Zargry)

Hamre is the director of the Symphonic and Concert Bands and the Musical Theater Ensemble at ARC. She said she was pleased by the joint ARC and Joyous Brass concert.

“The ARC groups performed well, and we were thrilled to have the guest ensemble, the Joyous Brass, join us,” Hamre said. “Their group is based on a British brass band similar to the Salvation Army Brass.”

It took almost three months to prepare for this concert, according to Hamre.

“We started working on the repertoire the first week of classes in August,” Hamre said.

The most important part of the concert was when the two bands performed together on the stage, according to Hamre.

“The last two combined songs were particularly gratifying, musically,” Hamre said. “Our brass players joined them for a 65-piece fanfare, followed by the epic ‘Pines of Rome’ where our brass played from the audience, and our woodwinds joined them on stage.”

Sebastian Johnson is a music major and was also part of the ARC concert band, playing clarinet. He said he also enjoyed the last song performed together at the concert.

“It was so big that not everyone could fit on stage, but they had to fill in the outside part,” Johnson said.

“The Joyous Brass is a community group of 31 musicians that includes many local music teachers and professional brass players,” Hamre said. “They play had a very high level as evidenced by their delicate execution of high notes which is incredibly hard to do.”

Joyous Brass founder and director Welling wrote in an email to the Current that “the concert was fabulous.”

“We thoroughly enjoyed performing with the bands at American River College,” Welling wrote.

According to Welling, the joint performance was a good experience for both bands.

“Joyous Brass is a British style brass band,” Welling wrote. “These bands are not very common in the United States. Students can hear the difference in music scoring (brass bands do not have woodwinds or strings) from concert bands.”

The next Concert and Symphonic Bands performance was on Dec. 10 at 7: 30 p.m. Tickets for future concerts will be available at the website brownpapertickets.com or at the ARC theater box office.

There is no age in equality