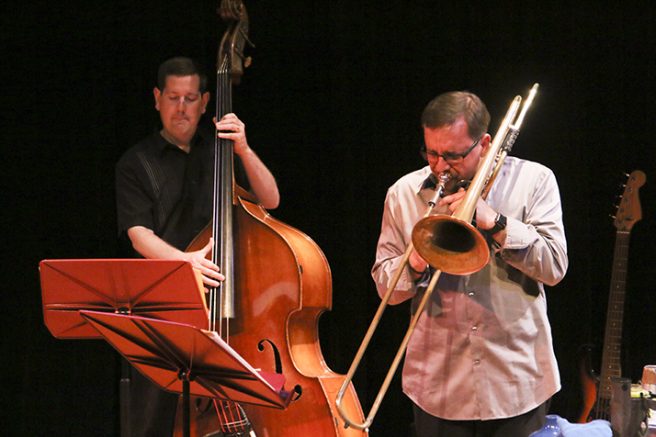 This recital has been held at least once a year for the past seven years as a way to demonstrate the professors’ expert skills on their respective instruments, reflected not only through the difficulty of their music, but the variety of different genres and styles exhibited.

“For me it’s showing the other students that I’m in the trenches with them,” Eifertsen said. “I’m practicing everyday, I’m with them, and that [they] are not alone.”

All of the music performed were original pieces composed by the band members. Each member contributed two songs for the night, encompassing widely different styles of music.

The audience that was in attendance was small, with a few music students, older community members, and the family of some of the performers present by the time the music started.

The first song performed, entitled “Benton’s Path,” by Eifertsen, had a very smooth sound to it, written in six-eight time giving the song a triplet feel, but it did not have the robotic feeling that a triplet timing often gives.

The next piece was “And Sonny Too,” by Lishman, a faster, almost free form style song that had a lot of what sounded like tempo or speed changes but really maintained the same tempo.

The next piece, which was written by Robinson, entitled “Have an Orange, Calm Down!” brought in a nice, slow song followed by Eifertsen’s “Once in This Life (for Robyn),” which sounded like a mix of a march and a jazz song.

The second half of the show started with Robinson’s “Twice the Blessing (For Samuel and Oliver),” which started as a slow song that switched to an upbeat feel while keeping the same theme.

The next piece, entitled “Erhu” by Gordon, is based on the traditional Chinese instrument of the same name, with flowy long tones going into solos.

This was followed by another song by Gordon called “What Would Henrik Do?” which had a happy rock ‘n’ roll kind of feel to it, in tribute to former Sacramento Ballet Symphony conductor Henrik Hansen who worked with the faculty group before his passing a year and a half ago and encouraged Gordon to pick up the drums again after a hiatus.

“I was saddened [by his passing] but he was a happy guy,” Gordon said. “I wanted to write a spiritually happy tune in his honor.”

The last piece for the evening was Lishman’s “Seven Fourths” which as it says on the title, is written in the seven-four timing with tempo changes going from slow to fast then back to slow.

Audience reception was warm, with most of the audience standing in applause after the concert. The vibe of the whole event was relatively informal, yet intimate due to the proximity of the performers.