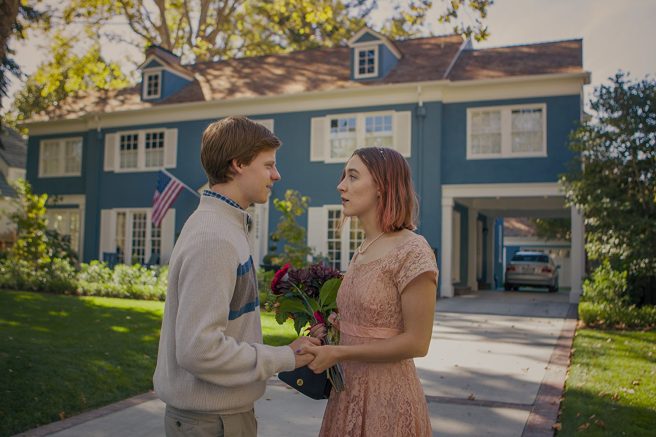 (Photo courtesy of A24 Films)

Greta Gerwig’s “Lady Bird” is now a staple in the coming-of-age movie genre—it’s a heartfelt, painfully honest picture of leaving home and awkwardly slipping into adult life and independence. The film is reminiscent of receiving warm hug before leaving behind the comfort and familiarity of home.

Gerwig’s stellar film chronicles high school senior Christine’s (self-named “Lady Bird”) navigation toward college alongside having to come to terms with herself and having to navigate her tumultuous relationship with her mother.

Irish-American actress Saoirse Ronan as Christine brings a painful, open honesty to the difficult task of handling the angst of being on the brink of adulthood, desiring freedom yet unsure of how to grasp it.

Gerwig, a Sacramento native who attended St. Francis High School, rolled her fond memories of her hometown into the splendid 93 minute semi-autobiographical presentation of adolescence. “Lady Bird” is a triumph both on the screen and in the box office, as it is now the highest-grossing film written and directed by a woman.

The complicated, lovely family dynamic portrayed in the film is undeniably relatable to a majority of viewers—Lady Bird’s tense closeness with her mother and endearing attitude towards her father mirror the complex teen years many endure.

What differentiates Gerwig’s film from other teen movies is her presentation of Lady Bird—a young woman who is wholeheartedly herself and who finds validation for her own dreams.

Gerwig graduated from St. Francis High School in 2003 and draws undeniable similarities between her experience and Lady Bird’s time at the fictional Sacred Heart, a homage to Sacramento’s Catholic school. Uniformed girls, endless church services and begrudging relationships with the nun-teacher hybrids are tributes distinct to Gerwig’s alma mater.

Gerwig’s fondness Sacramento is conveyed through her film—idyllic shots of the city are scattered throughout its running, creating a familiar feel within local and out-of-town viewers alike.

Locals will bask in the tender light Gerwig sheds upon her hometown, with scenic shots spanning well-known landmarks as a focal point of the film. Pastel panoramas of the valley leave viewers with a comforting, cashmere warmth.

The Tower Bridge, the now-defunct New Helvetia Coffee, and the Fab Forties of East Sacramento beckon nostalgia within the audience.

Gerwig’s quietly victorious “Lady Bird” exceeds what most films aspire to achieve: recognizing undeniably hilarious and familiar parallels between the story and the audience’s own life. “Lady Bird” is a tribute to hometown nostalgia and its message rings true for those in the throes of any crucial transition in life.