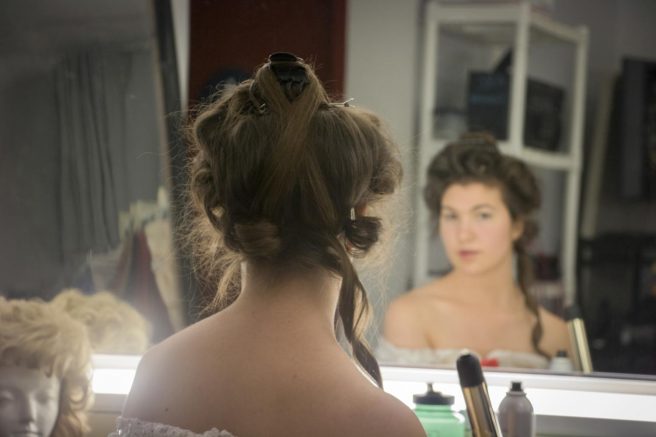 Actress Elizabeth Garbe gets ready for a dress rehearsal for American River College's production of "Beauty and the Beast." (Photo by Ashley Hayes-Stone)

It starts with a golden thread through the eye of a needle. Then the steady hum of a sewing machine begins to fill the room as Nikki Niebauer, a student costume designer at American River College, carefully guides the golden material.

A sea of fabric that consist of golden sequin chiffon, cream lace, and crimson ribbon roses surrounds Niebauer as she begins to create the iconic golden ball gown. She has spent the last 60 hours tailoring for the actress who will be playing the classic role of Belle. 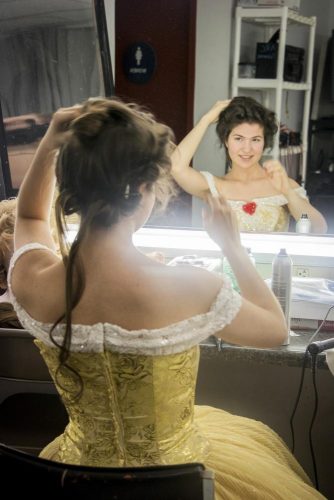 Elizabeth Garbe is in her first semester at ARC. She plans to obtain a musical acting certificate. What Garbe didn’t expect, is that she would be playing her first lead in a musical as Belle in ARC’s production of “Beauty and the Beast.”

According to Pamela Downs, director of “Beauty and the Beast,” 20 people auditioned for the role of Belle. After a lengthy elimination process that eventually whittled those 20 down to two, Garbe was chosen to play the iconic role of Belle.

“Twenty people auditioned for the role…eight to ten were called back and eventually it came down to two people,” Downs said.

Even though this is Garbe’s first musical lead, she says she has always had a desire for the theater.

“I sang before I spoke. All of my childhood friends and me were constantly putting on skits and shows and reenactments of our favorite movies,” Garbe said.

According to Garbe, she has been in several productions, including “Sound of Music,” “Oklahoma!” and “Anne of Green Gables”, but was unsure that she would ever play her dream role of Belle. Even when the show’s stage manager Patrick Riley called Garbe and told her she got the role she was skeptical that he must have had made a mistake.

“When I hung up I was convinced that he called the wrong person or that he didn’t actually say Belle,” Garbe said. “It didn’t feel real.”

Growing up, Garbe says she was a huge fan of Disney’s “Beauty and the Beast” and watched the movie repeatedly. Garbe says she always admired and identified with Belle because of her values on learning. Garbe even admits that she, like Belle, was never quite able to fit in.

“There’s this French quote that changed my life it goes: ‘we all have two lives. The second one begins when we realize we only have one.'” -Elizabeth Garbe

“I love that she loved books, words and reading … I never fit in or felt accepted growing up. In that way, I feel connected to this role,” Garbe said.

Garbe estimates that she invested 150 hours of rehearsal into Belle. That means acting, singing, and dancing on top of all of the research she had to put into the role.

She not only wanted to look the part of Belle, she wanted to emulate the character. 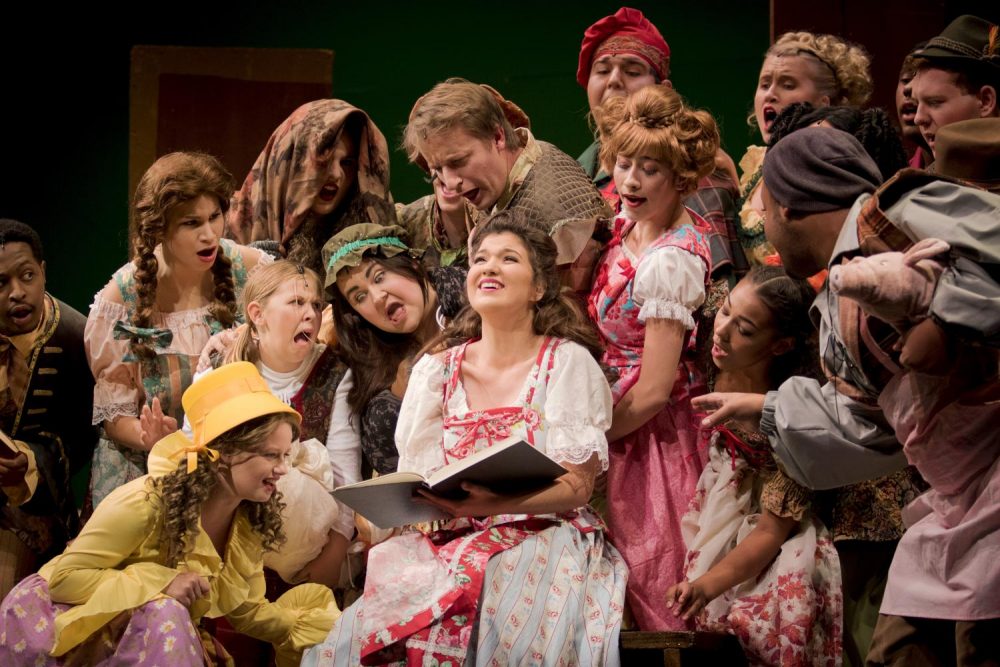 Garbe’s rehearsal even began to involve her family who, she says, have been deeply supportive of her passion. Her dad ran lines with her over and over and her mom invited family from all over the United States to come see Garbe perform. Garbe joked that she thought her mom might have set a record for most tickets bought to the show.

Garbe’s parents have always been supportive of their daughter’s interest. Her mother and father both come from a musical background and have always pushed her to follow her artistic passion. Garbe even taught herself piano at a young age.

But theater isn’t the only thing that Garbe is passionate about. Garbe, much like Belle, loves education, something she credits her mom and dad for instilling in her.

“You are talking to a girl who likes to read the introduction to dictionaries in her free time. I am totally bookworm,” Garbe said.

“The biggest take away for me, is that dreams really can come true because this is a massive dream for me and I am proving to myself that I am good enough to do it. That I am capable of something so amazing.” -Elizabeth Garbe

Garbe’s long term goal is to make a living following her passions.

“I hope that my future involves education and the arts in some shape or form,” Garbe said.

Garbe’s developed close relationships with the cast and crew and praised the theatre department.

She says she has learned a lot from her short time at ARC.

“The biggest take away for me, is that dreams really can come true because this is a massive dream for me and I am proving to myself that I am good enough to do it. That I am capable of something so amazing,” Garbe said. “The thing that I am going to take with me forever is the friendships that I’ve built here … everyone is so wonderful and so supportive.”

Garbe’s advice for anyone with a dream is to put in the work and do not rely on luck to get somewhere.

“You have to work hard for what you want,” Garbe said. “There’s this French quote that changed my life it goes: ‘we all have two lives. The second one begins when we realize we only have one.”