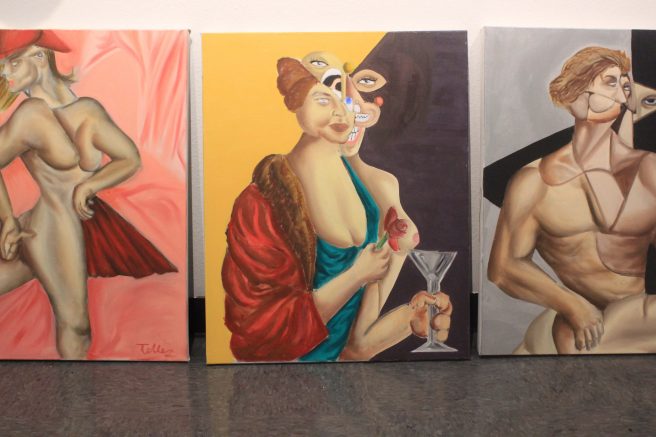 In the Shadow Box display, Tellez’s paintings scream out to be seen. His oil paintings show body figures that are chopped up, distorted and have a twist to them which makes them distinctive from the great Renaissance artists.

Tellez also takes cues from modern painters such as Pablo Picasso. Through visualizing both classical and modern ideas, Tellez created his own style of painting.

Tellez explained that he hasn’t found any artist that incorporates this twisted vision into their paintings.

“I don’t really see that from other artists, so I decided to do that on my own; if no one else has done it, I want to do it myself,” said Tellez.

Although he is a young and aspiring artist in the art world, Tellez is far from being an immature artist. An artist since he was young, Tellez’s art compositions have changed and progressed dramatically throughout the years.

He first began drawing characters and slowly moved to graffiti during middle school which lasted only until his senior year, being discouraged about the legal aspects of this type of art expression. Soon after, he proceeded to embrace linear concepts in his artwork.

“I figured I want to display my work in a fine art type of way after going to the Crocker [Art Museum]; the paintings there just blew me away,” Tellez said.

Tellez began painting three years ago, which he learned on his own without being taught painting techniques or concepts until taking a figurative painting class this semester.

Gathered over the past year, Tellez worked on his figurative painting collection on his own time outside of school as his personally inspired project.

Although his displayed work and the current paintings he is working on are both figurative, Tellez explained his current work is much more exact and complete, whereas the paintings displayed in the Shadow Box “are chopped up.”

“Most of what I’m doing right now are a lot different than these. They have a bigger composition with multiple figures in them,” Tellez said.

For the second time in his art life, Tellez’s artwork is being showcased to the public through the art club Shadow Box located across from the Kaneko Gallery.

Two of the paintings were shown in a dance studio, in an annual student show that the Los Rios art program holds in Folsom.

Theatre drawing, gallery operations and figurative painting are some of the recent classes and interests Tellez has been focused on at ARC.

Jose Tellez is focused on making a career with his art and plans to major in art in the future.