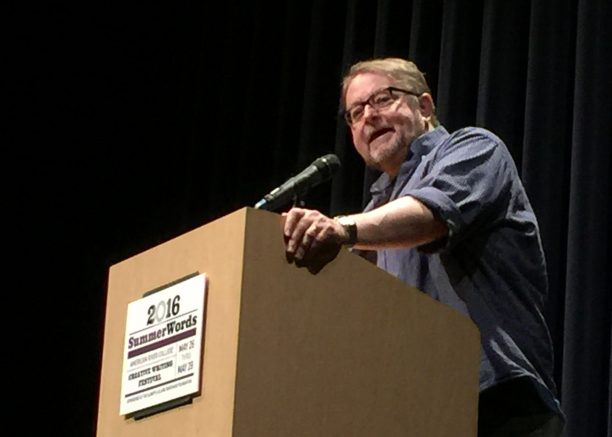 Author Luis Alberto Urrea speaks the the crowd at American River College during his keynote speech at SummerWords. (Photo by Jordan Schauberger)

ARC English professor Michael Spurgeon introduced Urrea, and said that the term “border writer” doesn’t come close to describing Urrea’s work detailing the personal and social impacts of living life on the border between the United States and Mexico.

Urrea, born in Tijuana and raised in San Diego, is famous for his stories about immigrant and “chicano” life, most notably his novel “The Devil’s Highway: A True Story,” the tale of an attempt by 26 men to cross the Mexican border into Arizona. “The Devil’s Highway” was a finalist for the Pulitzer Prize for General Non-Fiction.

“He is more interested in bridges than borders,” said Spurgeon. “That is why we wanted to bring him.”

Spurgeon borrowed a popular tagline of Urrea’s to end the speech, saying “Tijuana in the house.” 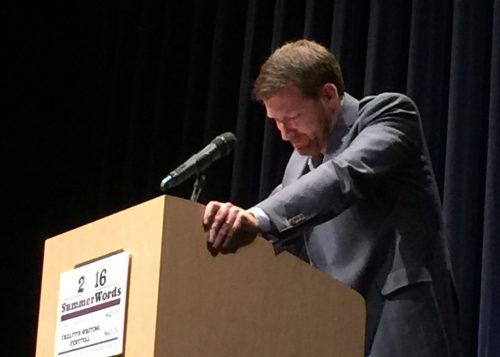 The end of Spurgeon’s speech was met with standing applause from the crowd, as Urrea walked to take the stage.

Urrea’s speech began with an echo of Spurgeon’s “Tijuana in the house” and a story about his coming to the U.S. at four years old with tuberculosis.

“The whole barrio had tuberculosis. People were dying. I was dying,” said Urrea.

Urrea said that throughout his life, his family told him not to share that he was born in Tijuana, or that he had tuberculosis, because it was “shameful” and he would not be respected.

“I am here to bring honor to the disrespected,” said Urrea. “That’s why I write.”

He told the audience that no matter their place in life, they should all consider themselves writers.

Switching between English and Spanish, Urrea told stories from his childhood as a Mexican boy who looked Irish but “spoke Tijuana” because his grandmother, Guadalupe Murray, was Irish, and his grandfather was Basque.

“We lived in a neighborhood that was brown versus black versus white,” said Urrea. “I was a civil rights unifying presence. … Everyone else said, ‘my fellows, shall we all kick his ass today?’”

His grandmother was the focus of many of his anecdotes. Urrea said Murray didn’t want to go to church, so she “played the system” by cooking fish for her priest and burning incense.

Urrea elicited uproarious laughter with a story about his grandmother attempting to smuggle a parrot across the border into San Diego by feeding it tequila and hiding it in her shirt.

Urrea wrapped up stories from his life with one about his father.

Urrea said that in school one day, a group of boys in the bathroom called him a “greaser.” When he went home to tell his father, his dad started asking him about the migration west and covered wagons.

Urrea said his father explained that their wheels and axles were made of wood and would catch fire from friction, and the only society “sophisticated enough to use grease was the Mexicans.”

Urrea said his father called it “a term of pride.”

“And I knew my dad was lying. … But he took a story, and took pain and made it beautiful.

“Your story is yours, and it’s sacred … You have no idea what your work will mean to somebody.”

Urrea then did the “reading” portion of his speech by reciting entirely from memory the short story “The Southside Raza Image Federation Corps of Discovery” from his book “The Water Museum: Stories.”

The story was a sort of coming-of-age story about a boy known as Junior and his two adventures with his friend Shadow.

Urrea shares a story of his grandmother with the crowd at #SummerWords pic.twitter.com/aUJHoznBfW

Urrea closed his speech with advice he received years ago from a woman in a small village where he was doing research for a book.

“(She said) ‘Literature is one of the healing arts. Stories, songs, those are things you use to heal people. Remember this when you make your art. It doesn’t matter if you’re cooking breakfast, writing a song, writing a book, dancing. When you make your art, what you do is light a signal fire in your own soul.

“‘It’s a fuego, a lighthouse. … People die alone, people die forgotten, people die unexpectedly, people die confused, and they are over there, in the dark. When you make your art, they can see the fire in your soul, and they can follow fire to fire until they get home.’”

Urrea’s keynote received a standing ovation from the crowd, and many participants shared their thoughts.

“The keynote was just brilliant. He was able to capture so much… it contained something for everyone. He is able to grasp multiple perspectives and contains it in an entertaining way. It’s amazing what he can do,” said SummerWords presenter and leader of the “Vocation vs. Avocation” workshop Anthony Barcellos.

ARC Film Studies student Zachariah Mejia said Urrea’s speech was “hard not to like” and he admired Urrea’s “passion for what he was talking about.”

“It was amazing. It’s astonishing how he’s able to bring all that stuff, that whole story from memory,” said Mejia’s sister, Dominique Mejia, who is a high school senior and two-time SummerWords scholarship winner.