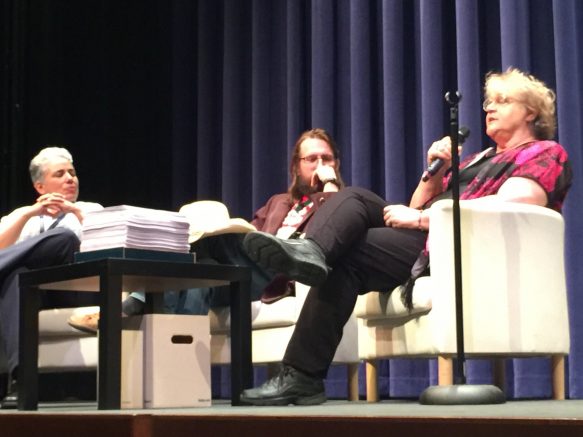 (Left to right) American River College English professors Cathy Arellano, Christian Kiefer and Lois Ann Abraham answer question after their readings at the first day of SummerWords. The creative writing festival is a four-day event that ends on Sunday. (Photo by Jordan Schauberger)

By Hannah Darden and Jordan Schauberger

The festival began at the ARC theater with attendee registration and a catered opening reception.

The opening reception allowed attendees and presenters alike to meet and mingle while they awaited the introduction and faculty reading event.

ARC’s dean of the English department, Doug Herndon, welcomed participants to SummerWords at the beginning of the event.

Arellano, Abraham and Kiefer read to a theater full of current and former ARC students, staff and faculty as well as members of the community.

Arellano read two excerpts from her upcoming book of poetry and prose about her family life and upbringing in the Mission District of San Francisco, titled “Salvation on Mission Street.”

Bethanie Humphreys, who has attended every SummerWords since its conception, called Arellano’s work “unexpected” and “powerful.”

The audience applauds Abraham as she walks of the stage at #SummerWords pic.twitter.com/e6S2AhJGwG

“Her wit is insightful, and she brings it to the page so well. I wish I had the opportunity to be one of her students,” said Gourdine.

Abraham’s reading went over time, as Kiefer and the crowd encouraged her to continue for an additional chapter.

Former ARC student Joshua Jonas said that he was “blown away” by Abraham’s reading.

Gourdine came to the stage a final time after Abraham’s reading to introduce Kiefer and described him someone who “knows his way around a blank page.”

Kiefer wears many hats — alongside his job as an ARC professor, he is a Pushcart Prize winning author, musician and father.

Kiefer began his reading by announcing that he had finished his novel. He then emptied a cardboard box onto a table, revealing a stack of hundreds of printed pages. 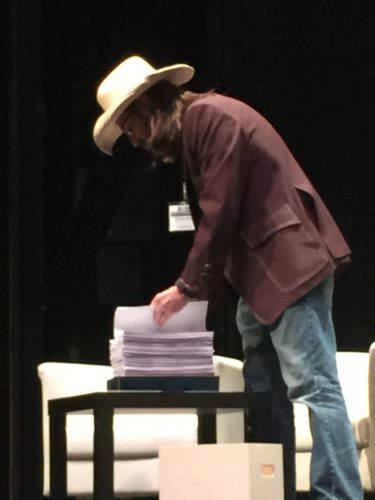 American River College English professor Christian Kiefer shows his 1,700 page book “Kingdom of Wolves” to the audience at the first day of SummerWords. Kiefer was one of three ARC faculty members who read from their novel on the first night of SummerWords’ four-day run. (Photo by Jordan Schauberger)

Kiefer read from the approximately 1,700-page manuscript of his upcoming book “Kingdom of Wolves.”

Following the readings, Kiefer, Arellano and Abraham hosted a question and answer panel and fielded questions from the audience.

The first question was “what is your favorite word?”, to which Kiefer responded “done.”

Arellano answered a question from an audience member regarding the reaction of her friends and family when they read work that is about them.

“I’m not exposing, I’m not trying to expose or tell secrets,” Arellano said. “I’m trying to say ‘we were here, we are here.’”

Abraham fielded a question about doing research for her books, and she cited Google as one of her most powerful tools.

“I tend to have protagonists who are clueless, and it saves a lot of work,” Abraham said.

When Kiefer was asked about the impact of editors, readers and collaborators on his work, he said that the current draft of “Kingdom of Wolves” is draft 39C, and that readers both help him improve his work and help him to feel good about it.

“My first reader of all my work is (ARC English professor) Michael Spurgeon,” said Kiefer. “You have readers you trust to tell you the truth, and readers who will lie to you and tell you you’re great, so make sure you show it to your mom … it can’t all be people kicking you in your tender area.”

“Kiefer writes the kind of books I love to read, as a writer and a reader,” Robinson said.

Jonas said that he is very excited for the rest of the festival.

“There are so many different workshops available,” Jonas said. “I feel like there’ll be something for everyone.”

The festival will continue tomorrow at 9:15 a.m. with a morning reception in the Student Center lobby.

The rest of the day will consist of four one hour and 15 minute workshop blocks followed by evening readings at 5:15 p.m. from authors David Dominguez, Bich Minh Nguyen and Josh Weil.

On what to expect from SummerWords tomorrow, Spurgeon said there will be a “full schedule of workshops and panels and good times.”