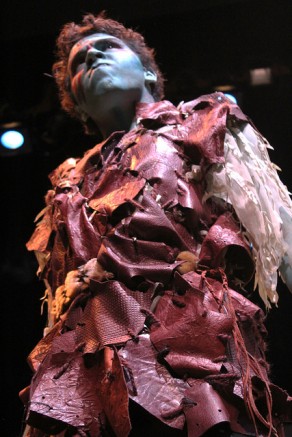 Emmanuel Jimenez rehearses a scene for the American River College theater department's upcoming performance of "The Tempest" on April 18, 2016. (Photo by Robert Hansen)

American River College’s Theater Program started their run of “The Tempest”  Friday which will continue through May 1.

Ticket prices are $15 for adults, $12 dollars for students with an ARC ID card and $8 for children.

Many ARC students attended the 8:00 p.m. showing held in the Theater Arts building.

During the opening of the show, Tracy Martin Shearer, the adjunct faculty of theater arts, stated a few facts about Shakespeare. He was born on April 23 and died on April 23. Each April 23 of every year is another anniversary in celebration of Shakespeare.

Second semester student, Adrian Silva attended the play Friday evening. “I really hope I can keep with it and follow the plot,” said Silva.

Silva mentioned this was a great occasion to ask a date to come along.

Audrey Gnesa was asked on a date by Silva to come see “The Tempest.” This was the first time both Silva and Gnesa saw the play.

“I’ve read Shakespeare books, but have never seen ‘The Tempest’ before. I’m excited to see the show,” said Gnesa.

“The Tempest” characters come alive in multiple ways on stage.

Prospero, former Duke of Milan, played by Rodney R. Reibel and his infant daughter Miranda, played by high school student Alexandria Wilson, were sent off to sea in hopes that they would die, but the unfit boat they were sent on made it to a deserted  island.

There Prospero discovered magical spirits, including  Ariel, played by Ariel Ryan. One day as multiple ships were out to sea Prospero and Ariel  stir up the tempest, causing all the ships to wreck and the passengers to end up on the shore of the island.

Separate groups landed  without the knowledge of others on the island as well.

Ferdinand, played by Evan Lucero, landed on the island alone. He came across Miranda, who was a young women at that point and they fall in love at first sight.

Alonso is the King of Naples, played by Josh Hooper. He and several others stray about the island hoping to find Ferdinand, who they thought had drowned.

Sebastian, Alonso’s brother, played by Victor Bolyshakanov, is creating a plot to kill his brother to become king.

Throughout the scene multiple passengers become drunk, begetting an inebriated scene that brought  a lot of laughter to the audience.

ARC Students that performed in past productions said they really enjoy shows like “The Tempest.” Kirsten Cutts and Camyrn Nichlos came to the show Friday to support their performing friends.

Cutts, an English major, said “I took theater art classes with a few of the people in ‘The Tempest’ and I came to support them.”

Nichols, a friend of Cutts, said he really enjoys ARC productions and came along to support friends in the play as well.

Doug Jim, a current ARC student, became interested in “The Tempest” from reading the Shakespearean play in his English class.

“I’m reading The Tempest for English 310. The show will be interesting to watch because I read the book first,” Jim Said.

Friday night a verity of students and people in the community attended the show. A snack bar was open before the show and during admission.

Pens featuring “The Tempest” art were being sold at the snack bar as well. No food or drinks are allowed inside the main theater.

Nicole Kesler is a first-semester student on the Current, where she serves as a staff member. She plans to transfer and receive her BA in communications and journalism.