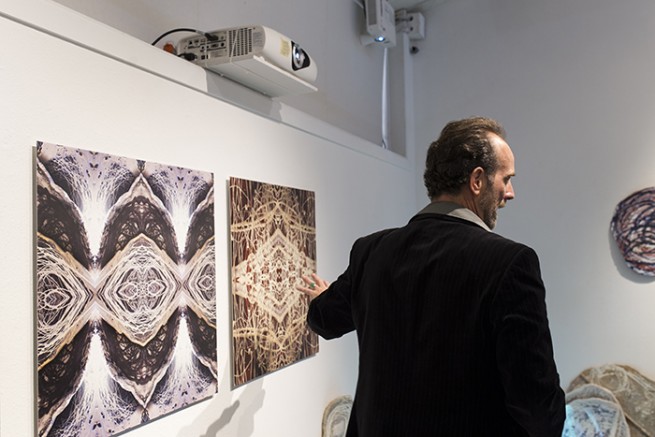 Ceramics were the main focus of the show, and all of the other art was based on those ceramic pieces.

The ceramics took the form of pigs and birds in Gill’s “Fowl” and “Swine” collections, which stood on their own, and ceramic porcelain paintings, which were utilized to create digital paintings.

Gill took photographs of his porcelain paintings, which were painted with patterns of swirls, circles and soft angles, and used apps to create mirror images, lay the patterns and compose digital paintings reminiscent of kaleidoscopes, which were printed onto aluminum.

“I have a photography background, I have a video background. But it was all done on my iPhone 6,” said Gill.

Some of the porcelain paintings were “yarn paintings,” or paintings of what look like abstract balls of yarn. 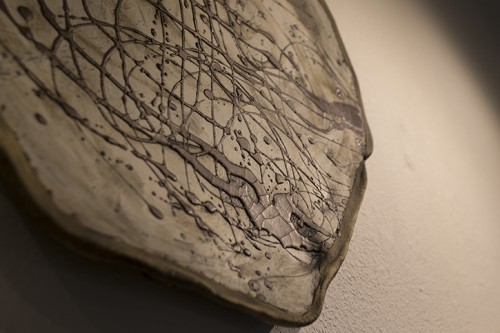 Gill also implemented performance art via video, recording his hands while making and painting ceramics, for a piece titled the “Hand Jobs Series.”

The video was projected onto the floor, so as to be reminiscent of the deck that the pieces were created on, said Gill.

“I love how he integrated the visceral ceramics with the new media, the video. And the bridge is the aluminum prints … He covered all the ways you can make art. I find it incredibly stimulating,” said Hooker.

Gill has been an artist for more than 25 years, and in his catalog he calls his “analog digital hybrids” ‒ his digital paintings, video and GIF series  ‒ his most important and transformative works.

Gill’s wife, Tina Gill, was wearing a dress printed with a pattern of Gill’s, and said she encouraged him to turn his digital paintings into textiles.

“He was playing around with the mirror images, and I told him they would make awesome textiles. He was thinking about printing textiles like banners, big pieces of fabric, and I said “let’s do t-shirts!”” said Tina Gill.

Tina Gill said she and Gill are considering opening an online storefront to sell clothing printed with Gill’s work.

Andrew Cabrera, an ARC student and friend of Guerrero’s, echoed her sentiments about the video component.

“That’s amazing. It’s awesome and it’s new, to come see something like that is so different. I like different.”

The Kaneko Gallery’s next show will be the annual student art show, and the gallery is currently seeking submissions from ARC students.

Entry fees are $5 for the first entry and $2 for each additional entry with a limit of five total entries.

The student art show will run from April 25 to May 11, with a show opening and awards ceremony April 26.