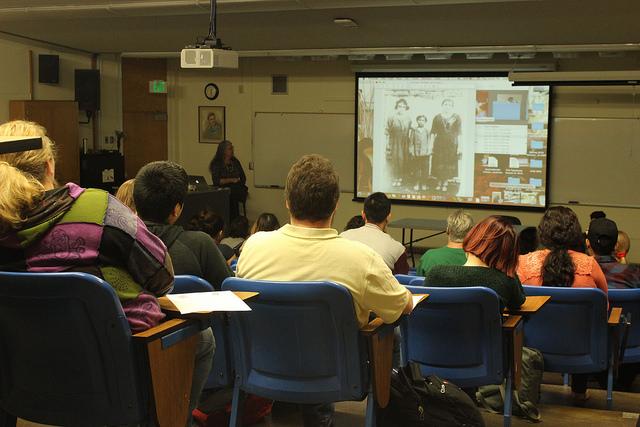 American River College hosted Celia Herrera Rodriguez at a 'Creative Connections' on Thursday that featured her paintings and illustrations. (Photo by Sharriyona Platt)

This week’s college hour featured artist Celia Herrera Rodriguez, focusing on Rodriguez’s artwork and the injustices she fights against for indigenous people like herself.

Rodriguez’s background, and how she grew up to achieve her many accomplishments, was the center of her speech.

She begins by talking about her grandmother, who raised her, and how her mother died very young of cancer.

She shares with the audience how her family wasn’t legalized when first coming to America from Gurando and how her mother’s death was the cause of them getting legalized.

Herrera is a brilliant artist whose paintings focus on symbols and the indigenous peoples’ culture.

Herrera is also a founding member of Chicana Indigenous Women, a program that started with her discussing the issues of indigenous people and what they face.

The program then grew worldwide and now meets in front of United Nations.

The program welcomes everyone, but those who participate must be indigenous.

Last week’s college hour’s main focus was indigenous peoples, such as those from Peru, Guatemala, Mexico, Puerto Rico and many more countries as well as what it really means to be indigenous.

Rodriguez helped explain what indigenous culture is, their history and background and a brief understanding of who they are and how they became the way they are.

During her presentation Rodriguez said “we look at our president and say everything’s okay now, but the bad news is that everything’s not okay.”

This led to Rodriguez speaking on the injustices and racial issues that every indigenous person may not realize.

Student Tona Miranda said “I love the awareness she brings about indigenous as well as how she reminds me of my mom.”

Another student expressed how they felt about the different kind of cuisine that indigenous people make.ARC student Stewart Behavidaz said “I believe all cultures are different and I would be surprised as well, but they should try some of the food, they may like it.”

The college hour brought an issue that taught many students about a different culture and way of life.

Students are able to see the upcoming speakers for college hour on the multiple event boards around the ARC campus.