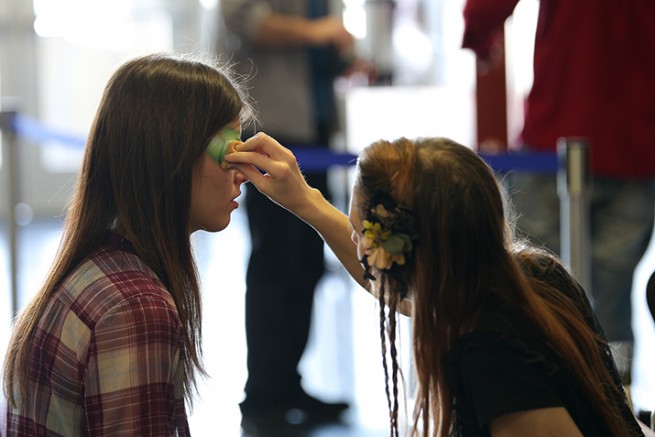 Makeup artists paint the faces of audience members before seeing American River College students perform in the production Gumbo. Gumbo is a theatrical variety show with a theme of "Aging." Performed on Feb. 6 2016. (Photo by Kyle Elsasser)

Interpretive dancing, singing, poetry and acting were amongst the many skits that created ‘GUMBO,’ a play and fundraiser that the American River College theater program hosted Feb. 6.

The theme of the play was aging, ‘‘from the womb to the bloom, and be groomed for the tomb.”

Students from the theater program combined their many talents to tell a cohesive story of aging.

The play consisted of 25 performers and 40 acts during the two hour show such as singing, dancing and interpretive dance to display how each stage of life affects every person differently.

“It was a great experience,” performer Katya Novskaya said. “Rehearsing and performing was my favorite.”

Novakaya remembers how great it was making new friends from being involved in the production and “seeing everyone getting better during rehearsal.”

Another performer, Andrea Sanderford, said that her experience rehearsing and performing in the show furthered her love for acting.

“I’m going to continue acting because of this performance,” Sanderford said.

The show received great feedback from audience members and attracted an array of people.

One audience member, Tamera Heacock, said she enjoys attending the theater department’s events because they showcase the students’ talents.

“The show was awesome, it was great to see so many students involved and so much talent in one room,” said Heacock.

Another audience member, Stephen Matthews, said he enjoyed the fun they brought to the story.

“They told a story that was very detailed,” Matthews said. “It was fun and very entertaining.”

Jazz ensembles perform in a concert at ARC