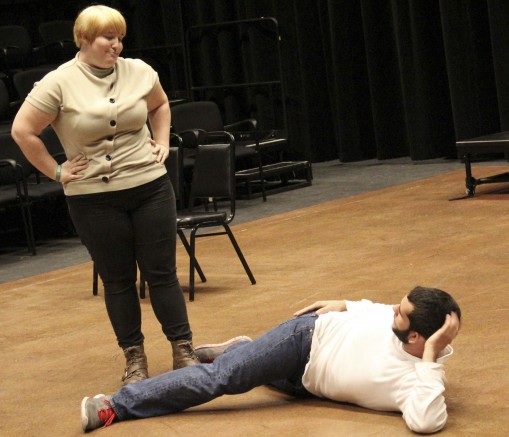 On Jan. 29 on stage two of the Theatre Department at ARC, the Irene Ryan Acting Scholarship nominees presented their work to a jury of professors in preparation for their performance at the American College Theater Festival (ACTF).

They will compete from Feb. 15-19  in Denver, against students from eight states representing their college and universities.

The Kennedy Center American College Theatre Festival (KCACTF) is a program that selects acting students from eight geographic regions around U.S. to participate on the event.

The KCACTF representatives go to see theatre productions in their region and decide which students would be considered for the Irene Ryan Acting Scholarship.

After the students are selected by the KCACTF representatives, the theatre department at the college helps the students to prepare for the competition in the festival.

“All of the faculty staff has been involved in some way like helping with paperwork… and Kathy (Burleson, Department Spokesperson) is amazing to keep ahead,” said Shearer.

The 7 p.m. meeting started with Shearer introducing special guest Jenny Krack, artistic director of Stage Right Productions and Associate Director of the Fair Oaks Theatre, to the students as one of the community collaborators.

Shearer explained the setup of the stage to the groups that were presenting their scenes.

Each pair of students had to present three pieces for a total of six minutes, including transitions, to be judged at the competition.

“When the jury starts the clock, they won’t stop the time for transitions.” said Shearer.

After the students presented both scenes and solo pieces, they received feedback from Shearer and Krack.

“Remember, you have to show your objectives in less than 5 minutes,” said Shearer.

Pollack, an Irene Ryan’s nominee for her performance in “Flea in the Ear” last spring 2015 at ARC, said that it was a major feedback day for them.

“We are very happy with our feedback because they were specific details and not major problems,” said Pollack.

The feedback to the students by both directors included more focus on diction, relaxing, smiling, clearing objectives and tactics, professionalism and time management.

“The judges can disqualify participants for going over time,” said Shearer.

After the feedback, the nominees answered to the directors why they chose the piece they presented.

“Be specific, short and sweet,” said Krack, who said it was an honor to help the students to prepare to succeed at ACTF.

Shearer said that she is very proud of the group of students that are going to ACTF.

“They work really hard and independently. They have to get the copyrights, select good partners, chose the pieces, receive feedback, and rehearse and rehearse… it’s a lot of pressure. The first round is narrowed down from 100 to 36 and then to 12 nominees. It’s a very intense competition. I’m really proud of our students,” said Shearer.

The Group of students is leaving to Denver, Colorado on Feb. 14.

“The real prize (of being nominated for the Irene Ryan Scholarship) is the honor to be there. It opens you a lot of opportunities,” Pollack said.