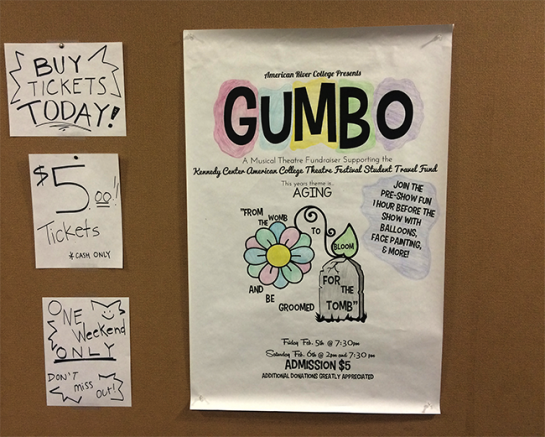 'Gumbo' is a variety theater production that will be hosted by the American River College theater program today and tomorrow. All proceeds will help students raise money to fund travel to a local competition. (Photo by Sharriyona Platt)

American River College’s theater program is hosting a performance of ‘Gumbo’ to help students raise money to fund travel to a regional competition.

Admission to the event is $5 and additional donations will be accepted toward funding.

‘Gumbo’ is theatrical variety show and the theme for this performance is ‘Aging: From the womb to the bloom, and be groomed for the tomb.’

“It is going through the stages of life, from birth, to childhood, and through adulthood, ending with senior living and death,” said Juliana Nassr, a performer in the show.

The play explores the intricate journey of aging through song, dance and drama and each performer will play different roles throughout the production.

‘Gumbo’ is known as “guerilla” theater and is created by several different artists, as opposed to a regular theater production that focuses on a core group of artists.

“The show is created as we go on,” explained Annelies Veldman, an ARC theater major and Gumbo performer.

Williams has been teaching, directing and choreographing at ARC since 1998.

‘Gumbo’ was an original idea created by Williams’ daughter, Sarah Williams who just returned from a trip to New Orleans.

Williams said he was “inspired to put together a show which was based on the talents of the cast members and not the needs of a particular dramatic play.”

Emalie Powers, an ARC theater major and ‘Gumbo’ performer, said she was excited to be a part of the production because of its different style of theater.

“My favorite part of Gumbo is how unique the show is,” Powers said. “It’s a show where a lot of people come together to create a show through our individual talents.”

The show was created and rehearsed in about 4 weeks and contains around 25 performers.

The money is being raised for the Kennedy Center American College Theatre Festival Student Travel Fund.

Veldman and about two dozen other students are traveling to Colorado to perform in various competitions and attend multiple conferences and workshops.

ARC students leave for the festival on Feb. 14.