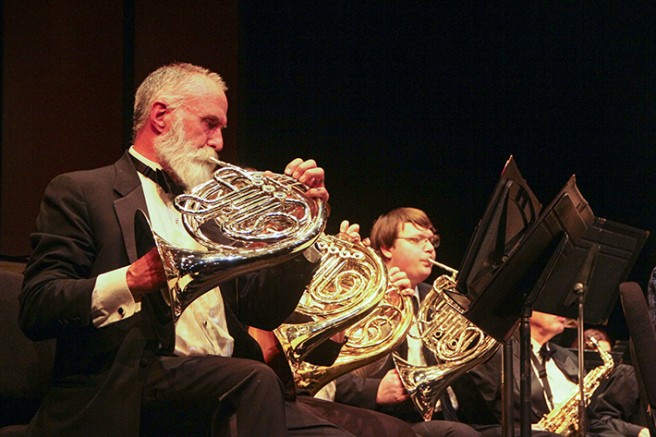 The concert began with seven songs performed by Wainwright’s band, beginning with the first movement of Beethoven’s third symphony, a triumphant and confident piece.

The ARC Concert Band performed next with the 19th century French piece ‘Orpheus,’ which is best known for being the tune for the ‘can-can’ dance.

In an ode to the holiday season, the flute choir performed the traditional Christmas carol ‘What Child is This?’ (story continues below) 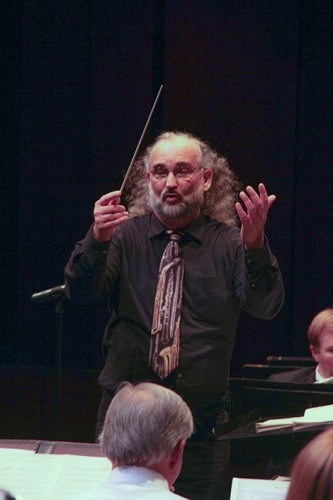 Ron Wainwright, the director of the Capitol City Community Band, conducts that band in unison with the American River College Concert and Symphonic Bands on Monday. (Photo by John Ferrannini)

After the symphonic band performed, the concert and symphonic bands combined to play the ‘Cane River Murals’ by the British composer Martin Ellerby.

The performance, which was in five parts, was at times both powerful and whimsical. Hamre bought rights to the ‘Cane River Murals,’ which was written only three years ago.

“It’s a really wonderful piece. I just discovered it this summer,” said Hamre. “I went to a convention … (and) all the music was modern and I thought ‘I’m going to hate this.’ But I found this piece.”

Hamre said that Ellerby saw murals of the Cane River in Louisiana and wrote music based on how the artwork made him feel.

Susan Powers, who played the flute with the ARC bands, said that the ‘Cane River Murals’ was her favorite piece.

The ARC bands and the CCCB joined together at the end for another Christmas piece, ‘Alleluia! Laudamus Te!’

The song, picked by Hamre, was performed under the direction of Wainwright.

“I played on the organ as loud as I could and I couldn’t be heard,” said Hamre.

Hamre asked Wainwright a few months ago if the bands could perform together.

“We have visiting bands every semester. Last concert, it was a middle school,” said Hamre. “We want them exposed to us and us to them.”

Wainwright said that he knows Hamre from his work at Tim’s Band Instrument Service on Marconi Avenue.

“I met her because I managed the largest orchestra and band store in town. We supply a lot of the schools around here,” said Wainwright. “I’ve been director of the community band for two years. (Hamre) invited us to do this and the rest is history.”

“Some of the musicians are my classmates,” he said. “It’s hard to get this music for this price anywhere else.”

Board of Trustees: Holocaust comments ‘abhorrent’

Be the first to comment on "ARC, community bands join for holiday concert"