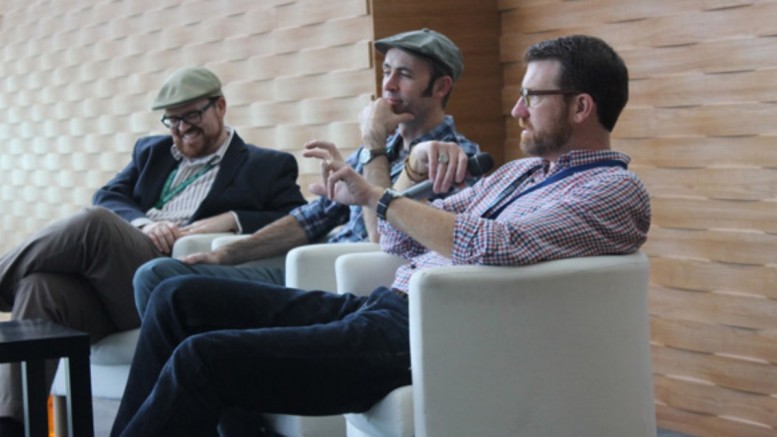 During a panel discussion on screenwriting, American River College English professor Jason Sinclair Long told an audience at SummerWords what it was like when he pitched a screenplay in Hollywood.

“He said, ‘you have three minutes’, and he sat back and read the newspaper while I pitched,” said Long. “I tried to pitch my ass off.”

Spurgeon said that there is a reason why so many movies are so similar.

“There are very specific things that happen at very specific points,” said Spurgeon. “Producers will turn to page 60 expecting something to happen and if it doesn’t, they’ll think ‘there’s something very wrong with that script.’”

Long said that one of his college professors, Lew Hunter, noticed that many movies follow familiar patterns present in myth identified by philosopher Joseph Campbell.

Spurgeon elaborated on the elements that are present in most films.

He said that the first ten minutes establish the rules for the movie’s universe.

“With ‘Star Wars,’ if one hour into it someone pulls up in a ‘57 Chevy, it’s violated the physical universe of the movie,” said Spurgeon.

This is followed by “the catalyst,” which Spurgeon described as “the moment something happens to start the story.”

After “the catalyst,” the first act closes with “the big event.” This is something that has happened in the life of the character that makes return to their previous way of life impossible.

The second act begins with the question of how to respond to “the big event.”

“The question ‒ which is always dialogue ‒ doesn’t have to be posed as a question, but we have to understand it to be a question.”

Spurgeon’s example was the film “Star Wars,” and the question posed at the beginning of the second act was whether Luke Skywalker would go with Obi-Wan Kenobi to become a jedi knight.

After the question is answered comes the “pinch,” which is when the main character either fully commits to the objective or goal, or when the objective has to be changed in light of present circumstances.

The “dark night of the soul” comes at about three-quarters the way through the film. This is when it becomes doubtful whether the main character will achieve their goal or give up.

The film ends shortly after “the showdown,” which Spurgeon described as a “face-to-face confrontation between the protagonist and the antagonist.”

Long added that some screenwriters can bend these general principles of screenwriting, but only when they know the rules well.

“‘Pulp Fiction’ breaks all the rules,” said Long. “But only because Quentin Tarantino knew every rule of every film ever made. You’ve got to cut your teeth on this stuff.”

But Bradford noted that avant-garde films sometimes do not follow traditional structures.

“‘Run Lola Run’ could hypothetically go on forever,” said Bradford. “The type of screenwriting I’d like to focus on are stories about cultures rather than individuals.”

Long offered advice for those seeking a career in writing screenplays.

“Send it to festivals and contests, but pick and choose wisely,” said Long, who added that prospective professionals should have several ideas in case one doesn’t pan out.

Spurgeon said that not all screenplays that are bought are made into films.

“Sometimes when a company buys a screenplay, they have no intention of ever using it,” said Spurgeon. “They just want it off the market.”