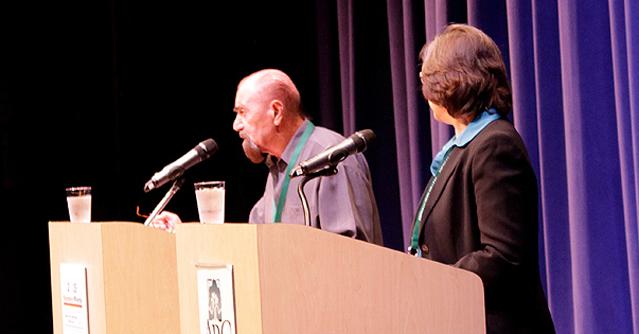 “I hope that Michael Spurgeon and I survive the event,” said Kiefer. “I hope everyone has a good time and gets what they want out of it.”

English major Annette Miranda said she is looking for “inspiration.”

“I just want to get information from instructors and writers who are published,” said Miranda. “It better be fun.”

After participants had the chance to meet and discuss their hopes for the weekend in the lobby of the ARC theater, they went inside to hear poetry readings from two poets published by Ad Lumen Press.

“As far as I know (Ad Lumen) is the only fully operational small press being run out of a two year institution,” Kiefer said.

Winner of the 2010 Iran Annual Book Prize Ziaeddin Torabi took the stage to read his poems in Farsi before a translator read them in English.

Kiefer described the award as “essentially the Pulitzer and the National Book Award rolled into one.”

“This represents years of my work,” said Torabi.

Traci Gourdine was the second poet that read on Thursday. She selected poems from her poetry collection that was published by Ad Lumen Press, “Ringing in the Wind.”

Gourdine said that the poems, “Father Faith” and “What She Carries”, were inspired by childhood events.

“It was fun, fun, fun,” said Gourdine on reciting her poetry. “I read from the book, but I also had some new poems I was able to try out.”

Workshops, readings and panels associated with the SummerWords festival will take place on campus through Sunday afternoon.