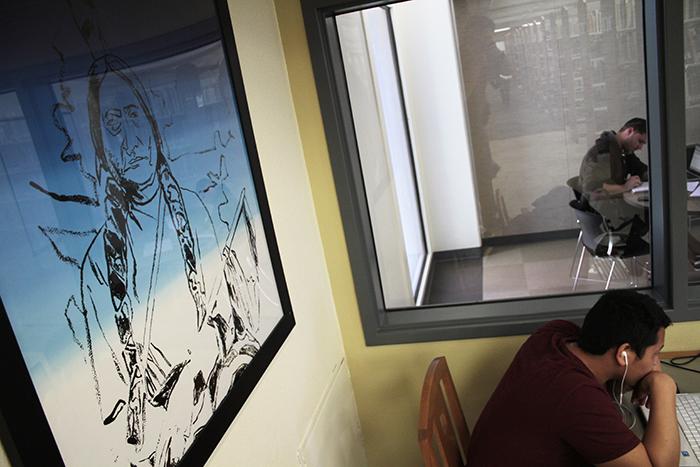 Left is an Andy Warhol artwork hanging on the wall while top right, Colin Lewis working on in a work room, bottom right Kong Meng Lo on his laptop.

Art professor Ken Magri said that when he found out years ago that Sacramento State University and the University of California, Davis received donations of Andy Warhol’s art, it felt like “we didn’t get invited to the prom.”

But after having what he calls “the audacity to ask,” ARC became the only California community college to have works by the man considered to be the father of American pop art.

Five rejected Andy Warhol silkscreens and dozens of polaroid prints are on display throughout the campus, mostly in inconspicuous places.

“They’re off-editions, leftover surplus stuff, where the paper cut was wrong,” said Magri. “He never wanted to throw anything away.”

One of the more prominently placed silkscreens, “Annie Oakley,” is in the office of ARC President Thomas Greene.

“Art serves multiple purposes,” said Greene. “It is an opportunity to inspire the creative process … part of what I’m trying to do is to create an opportunity for others to appreciate and see this art.”

Magri, who was instrumental in bringing the art to ARC, said his main motivation was “jealousy.”

“I’m dead serious. I read in the (Sacramento) Bee that the Warhol Foundation was giving 150 photos to U.C. Davis and Sacramento State and I got jealous,” said Magri. “I don’t want to be a wallflower.”

Magri said he reached out to the Andy Warhol Foundation for the Visual Arts, not expecting to hear back from them.

“For one-and-a-half years they never got back to me, and then they got back and I thought ‘Oh my God, they’re actually considering this,’” said Magri. “Then one day, we got an inventory list.”

The foundation originally donated several dozen polaroid prints, which were displayed in the James Kaneko Gallery in March 2012 before they were spread throughout the campus.

In 2014, the foundation donated the five rejected silkscreens to ARC.

Silkscreens are copies of the painting made by pressing a silk mesh against the original. They are intended to have a limited run.

“One could do a walking tour of the Warhol’s on campus,” said Magri. “That’s what the Warhol people had in mind. They wanted to get it out where the people could see it.”

Magri said that ARC has done original research on some of the artwork.

Next to “Committee 2000” in the Oak Cafe is the Warhol polaroid “Cornelia Guest and Unidentified Man.”

“We found out who certain people are in certain photographs. We called Cornelia Guest and she told us it was taken in Regine’s, a discotheque in New York,” said Magri. “We asked her who the man was and she said ‘that’s my brother.’”

In addition to the famous multicolor portraits of Marilyn Monroe and the canvas of 32 Campbell’s soup cans, Warhol is credited with coining the phrase “15 minutes of fame” to refer to the suddenly well-known.

Magri said that he met Andy Warhol in 1981 when he visited Sacramento.

“Warhol is one of my favorite artists,” said Magri. “He came to Sacramento and I met him. I thought how many times does this guy come to Sacramento? I got to talk to him alone for about a minute.”

Magri said that he was “mostly” responsible for the decision as to where the art should go.

“We decided to put them in fewer locations but in larger groups of photographs,” said Magri. “We were looking for somewhere safe but with visibility. President Greene asked for the ‘Annie Oakley’ for his office.”

While “Annie Oakley” and “Committee 2000” have a plaque next to them with the name of the piece and Warhol’s name, the three other rejected silkscreens do not.

Some ARC students did not know the art was present where they regularly take classes and pass by.

Kristan Jackson, a culinary arts major, did not notice “Committee 2000” hanging in the Oak Cafe.

“I’ve actually never noticed it,” she said. “It’s cool to know they are there. It’s nice to see artwork rather than plain walls.”

Judy Kennedy, a patron at the Oak Cafe, also hadn’t noticed the art.

“It looks like it was made for the cafe,” said Kennedy. “This is kind of like a bar atmosphere, and the whole building is contemporary, so this painting is perfect.”

Clusters of black and white photographs and polaroid prints are located in the ARC Foundation office, the Oak Cafe and in the division offices of Fine and Applied Arts, Health and Education and Behavioral and Social Sciences.

Scott Crow, ARC’s public relations officer, had a print of a 1980 portrait of Sylvester Stallone in his administrative building office.

“I won’t claim to be an art history expert, but what’s so unique about Andy’s work is that it is so relevant to today’s culture of celebrity,” said Crow.

Added Crow: “It’s important to culture. He’s as relevant as he’s ever been. It’s important for people, especially young people, to understand his importance to American cultural history.”

Magri, who says he is retiring after the Spring 2016 semester, says that his experience with the Warhol art has taught him an important lesson.

“I never actually believed this was going to happen,” said Magri. “Once we got those, we got on the list. It was because we had the audacity to ask. If you don’t ask, you’ll never find out that the answer is yes.”