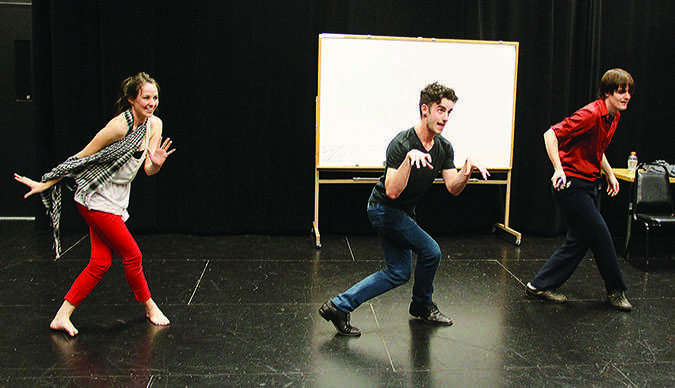 A monster of a musical is being pieced together by American River College’s theater department, just in time for the month of Halloween.

“Young Frankenstein” opens Oct. 10, and promises to be equal parts amusing and boisterous in production.

Director Pamela Downs describes the talent level of the production as “near-Broadway,” and also adds that one portion of the show will feature “more people tap dancing on stage than you’ve ever seen in your life.”

“Young Frankenstein,” originally a 1974 film written by Mel Brooks and Gene Wilder and featured Wilder as the titular character, was adapted into a stage musical by Brooks in 2007.

Brooks has described “Young Frankenstein” as his favorite film, hefty praise from one of the biggest names in comedy since the 1960s.

“I love Mel Brooks, and I’ve always loved Young Frankenstein. The first time I saw it, I just laughed so hard,” said Downs.

“I love Mel Brooks. His comedy is so unique to him that you have to use his name. And (Young Frankenstein is) just a big parody of horror, and it’s so good,” Nassr said.

Downs, who teaches a class at ARC on the horror film genre, has thrown in some extra homages to older horror films.

“Pam puts in so many wacky ideas … if you know the original production well, and you come to see this show, you’ll notice lots of differences,” said Nassr.

The rehearsal process of any musical is long and tedious, but between the subject matter and the camaraderie of the large cast, spirits have stayed high.

“We laugh so much at rehearsals that we should all pay money just to be there,” said Downs.

Nassr, Hirtzel and Smith have been dubbed “the golden trio” by the rest of the cast because of the amount of time they spend together at rehearsals and in the play.

Nassr, who will play Inga, the yodeling lab assistant to Dr. Frankenstein, loves her character.

“I saw the show last spring, and I fell in love with Inga,” said Nassr. “She’s so carefree and fun, but she also has such a great comedic timing about her.

“She just has a quirkiness but she’s still natural. And people also kind of forget that she’s really smart and has done her studies.”

On Oct. 18, “Young Frankenstein” will feature a dinner theater in coordination with the culinary arts department of ARC.

“The food will have a Transylvanian flair to it, but also contain homages to Mel Brooks’ comedy. You attend the dinner first and then walk over to the theater and watch a fantastic show,” said Downs.

The Oct. 24 showing will begin at midnight, particularly “for the students, who keep later hours than most do,” said Downs. Attendees are encouraged to come wearing their Halloween costumes.

Be the first to comment on "A monster of a musical: ‘Young Frankenstein’ brings Mel Brooks to ARC"