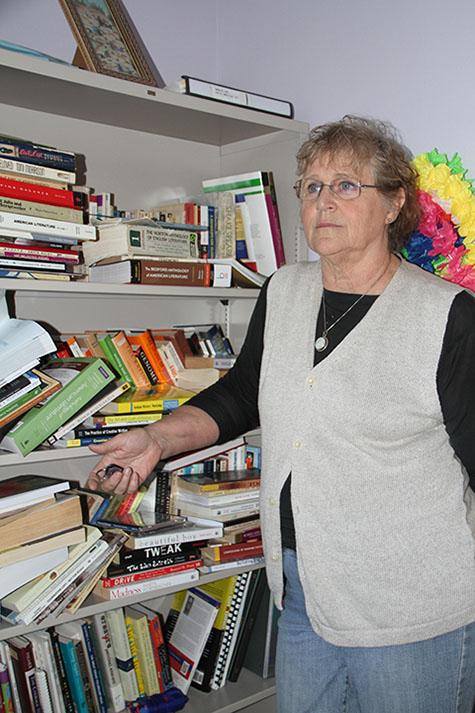 Usually an author would approach a publisher to have their book published, but it was a different story for American River College professor Lois Ann Abraham.

“Ad Lumen Press, which is sort of me and (ARC English professor) Christian Kiefer–he read many of my short stories and he said, ‘Let’s do a collection,’” said Abraham.

“I don’t like the business of writing. It makes me all insecure and weird. That is common amongst writers. It’s hard to be an entrepreneur and a creator at the same time.”

Kiefer said, “She and I shared an office … I knew she was writing short fiction, and she shared with me, and I asked for more, and I finally I just asked her to print it all and I read it all and I thought, ‘This would make a great book’.

“When we started the press here, she was one of the three or four books we were for sure we wanted to do first.”

The titular story, “Circus Girl,” was originally titled “The Use of Circumstance” and was initially a reaction to a short story by William Carlos Williams called “The Use of Force,” which features a doctor who forced a child’s mouth open with a spoon to see if she had diphtheria.

Abraham talked about the evolution of “Circus Girl.”

“The characters didn’t even have names in the first version, it was just ‘he’ and ‘she,’” said Abraham.

“I think she was from the circus for about two sentences, and then we’re doing this collection, and I talked with my sister about it in the hotel in Martinique and realized this had to have much more circus in it, even though I didn’t get the title ‘Circus Girl,’ yet.

“If it’s going to have Calliope in it and the clown thing, it has to be a lot stronger.”

Moving from the writing to the actual layout of the book was a process as well, said Abraham.

“The editorial board put together an order in which they thought it should be in. I totally disagreed with it, so we went my way.

“The way I thought about it was, so much of my writing is … about a voice, it’s about a teller of a story. I don’t want the “I” in one story to get confused with another “I” in another story, so some of them are in third person. That’s why it goes from third person to first person to third person.”

Tammy Ballard, an acquaintance of Abraham, said she gave a copy of “Circus Girl” to a woman who Ballard felt could use the book.

“I met a young lady who was really angry, a young teenage girl,” said Ballard.

“She was having some problems, and I read (‘Circus Girl’), and thought there are some stories that would be good for her. Clearly she had no one to talk to. She’s been writing and she’s been coming to me once a week now, and she’s letting out. It’s not even about talent, she’s never been opened up to literature and art.”

“I never thought of it as useful in that way,” Abraham said.

Kiefer said, “‘Mi Casa’ was one of the first ones I read, I loved that story. There is not a story in here I just don’t love, really. I started with ‘Circus Girl,’ … there is some sort of immediacy in that story that I think captures the tone and the themes in that book. For me that is the gateway drug to the Lois Anne addiction.”

A story at the end of the book called “The Iris in the Garden” is the fourth chapter from the novel Abraham is currently working on called “Stillscape With Ashes,” about a female painter set in the early 1900s in Martinique.

Abraham has also finished a novel called “Tina Goes to Heaven” that has yet to be published.

“I am still looking an agent for that, a publisher, it’s really miserable business to find an agent,” said Abraham.

Queens of the stage