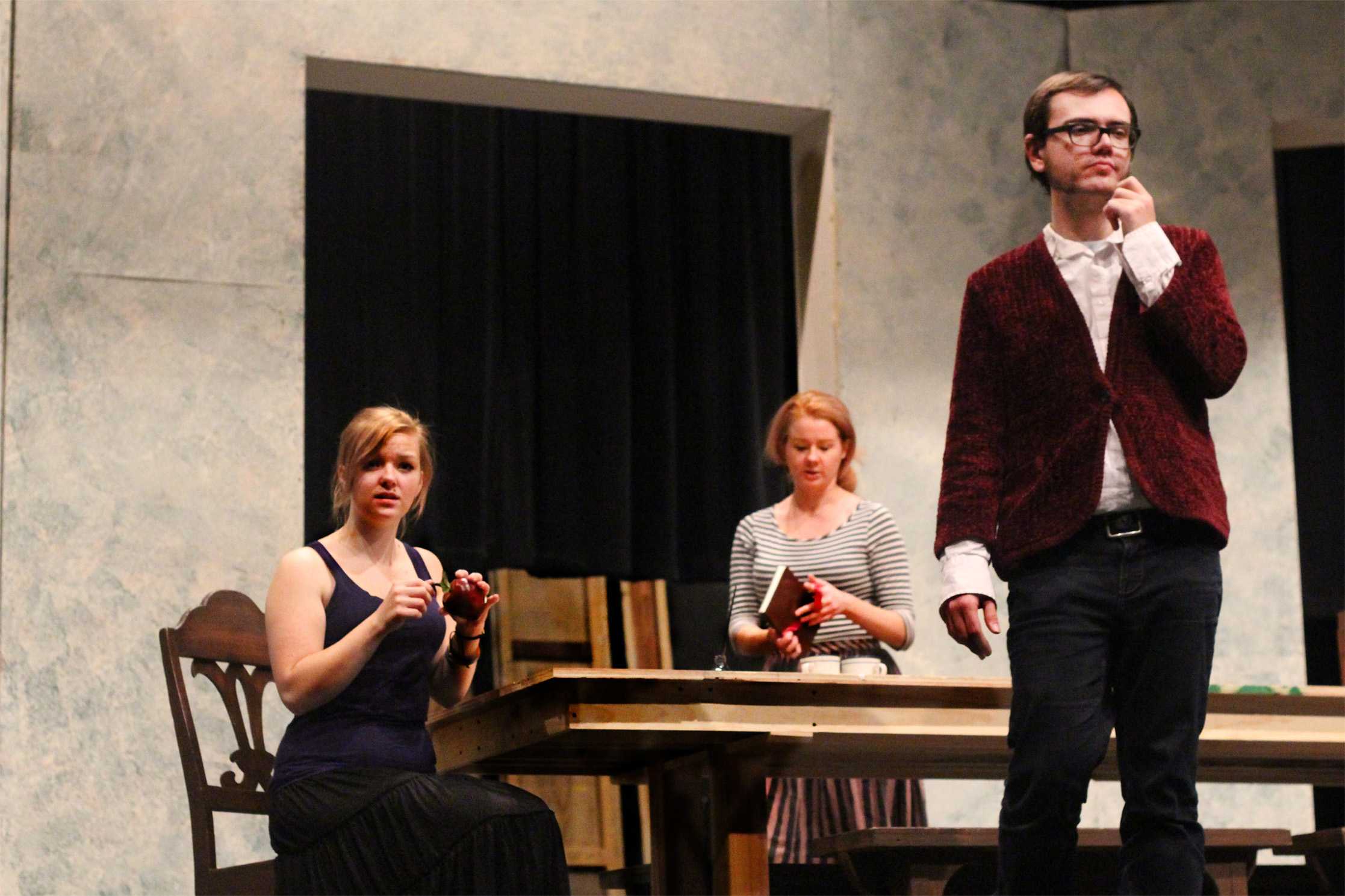 Cast members Mary Hill and Andy LEggett rehearse on Feb. 18. Their characters appear in the first timeline of the play. (Photo courtesy of Alisha Kirby)

The first of two main stage plays presented by the American River College Theater program this semester, will begin its two-week run on Friday.

“Arcadia,” directed by Tracy Martin Shearer, is a mix of science, sexuality and humor, written in 1993 by Tom Stoppard.

It has since been called one of the finest plays Stoppard ever wrote. After its first run in the U.K., a critic from The Daily Telegraph wrote, “I have never left a play more convinced that I had just witnessed a masterpiece.”

“I love this play personally because of all of its subtlety, sexual subtlety (and) humorous subtlety. It’s just gross and amazing and I love every bit of it. And it’s incredibly intelligent. Tom Stoppard is a genius, if you read any of his other plays, he is genius,” says Avery.

“It’s very intellectual. A lot of it can maybe be a little too intellectual,” says Avery. “All of the staff of the American River College theater department is fantastic and all of the directors are fantastic, but I think this play is good for Tracy in particular because she has such a complicated mind and I think a play this deep could only be done justice by Tracy.”

Andy Legget, a music major, appearing in his third play directed by Shearer, agrees that she brings crucial elements to the production.

“What I think Tracy brings to it is a distinct sense of style, because it’s something that matters to her very much. She wants to be authentic in doing the regency time period, just like she did here in ‘Pride and Prejudice,’ which was very much about regency. And also, she’s a professional vocal director and dialect coach, so she’s definitely been the best director to work with in that regard.”

“I think in a show that’s so text-heavy and so intellectual–almost hard to wrap your mind around–she’s a really great director, because not only does she get that, but she’s able to communicate that to both the actors and the audience.

A live tortoise is also a member of the cast, appearing on stage during both time periods, symbolizing the passing of time.

The play runs Thursdays, Fridays, Saturdays and Sundays from Feb. 28 through March 9. For tickets and information, visit ARCtheatre.org or call the ARC box office at (916) 484-8234.

Update: ARC gets booted by CCSF in NorCal championship game

Be the first to comment on "Sex, science, and a tortoise"