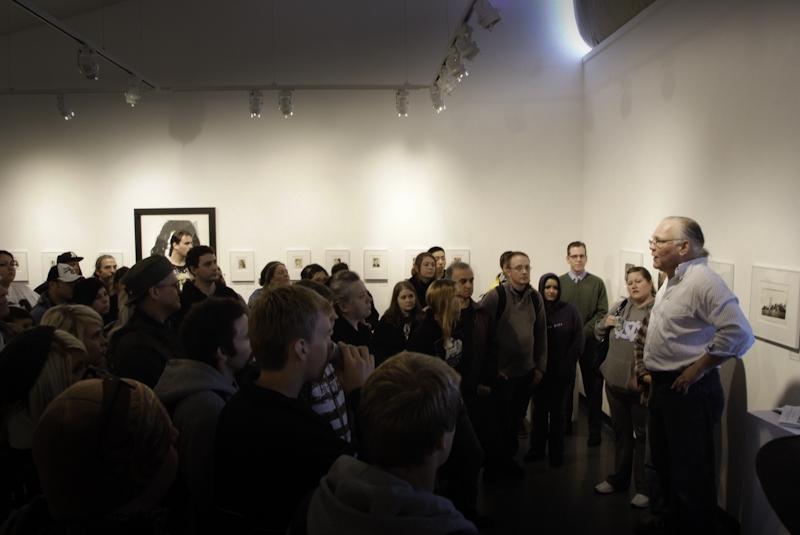 It was standing-room-only in the James Kaneko Gallery on March 13 during a reception for the campus’ newest exhibit “Warhol’s New York,” which features rare photos by the famous artist.

During his talk, Magri explained how he was able to procure the photographs from the Andy Warhol Foundation for the Visual Arts, Inc. and the Andy Warhol Photographic Legacy Program ARC’s permanent collection.

After weeks of waiting, “I was shocked to log-on to my e-mail address and see that the Foundation had granted ARC 150 photos from Warhol’s collection,” said Magri.

The event was made possible by students such as 24-year-old art major Kadie Anderson, who is enrolled in ARC Art Professor Michael Sheldon’s Art Gallery Operations course.

Sheldon, who also serves as the Director of the Kaneko Gallery, along with his students, donated a recent Saturday to hang the collection in preparation for the exhibit’s opening.

“Warhol’s New York” will run daily from March 12-30 and is open to the public who for free can see firsthand the works of the late Warhol whom Magri describes as “one, if not the greatest ‘pop artists’ in American art history.”

The exhibit is being funded by the ARC Foundation, which will hold its own reception on March 29 (the public can attend for a suggested donation of $20). The event will feature live music from a jazz band and an auction in which attendees can purchase tickets to win replicas of Warhol’s classic soup can produced and donated to the foundation by Campbell’s Soup Co.

Robert Nash, a 23-year-old ARC student majoring in art who attended the reception, predicts that the Warhol exhibit will be “one of the biggest shows in the history of ARC’s James Kaneko Gallery.”

“With the help of news media coverage, we hope to bring a lot more of the community to the gallery,” said Nash.

A program detailing all of the Warhol photographs in the gallery will be available for $5. The proceeds will go toward the ARC Foundation.